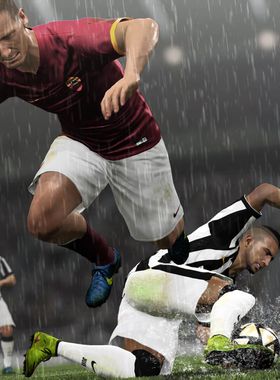 From its humble origins on PS One, the PES series has leaped from format to format, adding ever more realism as it evolved. This heritage has been celebrated in PES 2016s new tagline Love The Past, Play The Future, highlighting the series recent return to core PES values in last years PES 2015 and focusing on the many new gameplay and presentational elements that will further establish the series as the definitive football experience.

PES 2016 aims to retain its title of Best Sports Game, as voted across the world at games shows and by major media outlets in 2014, by continuing to lead the way in the recreation of The Beautiful Game. The series aims to go back to its roots to create an exciting match between users, and proudly present PES 2016 to deliver quality gameplay following The Pitch is Ours mantra. From further integration of the industry leading Fox Engine to bring the on-pitch action to life and the full commitment to Centre the product around creating the best gameplay experience, to the full redevelopment of Master League, every facet of the game has been enhanced to deliver yet another outstanding product.

Where can I buy a Pro Evolution Soccer 2016 Key?

With GameGator, you are able to compare 5 deals across verified and trusted stores to find the cheapest Pro Evolution Soccer 2016 Key for a fair price. All stores currently listed have to undergo very specific testing to ensure that customer support, game deliveries, and the game keys themselves are of the highest quality. To sweeten the deal, we offer you specific discount codes, which you will not be able to find anywhere else. This allows us to beat all competitor prices and provide you with the cheapest, most trustworthy deals. If the current cheapest price of $102.46 for Pro Evolution Soccer 2016 is too high, create a price alert and we will alert you through email, SMS, or discord the moment the Pro Evolution Soccer 2016 price matches your budget.

Can I play Pro Evolution Soccer 2016 immediately after the purchase?

What store should I choose for the best Pro Evolution Soccer 2016 Deal?