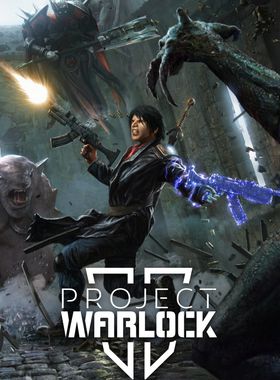 Palmer - a dedicated disciple of Warlock wakes up in his castle's bedroom. His master nowhere to be found, castle overrun by demons, and only his trusted arsenal as means to stop them and make sense of it all - the young warlock must now collect himself, his guns, recharge the staff and make his way to a nearby stronghold spewing hordes of the hideous monsters.

Project Warlock II picks up right after the events of the first game, shifting the perspective to that of three disciples of the first game's Warlock. Each perfecting their own discipline, with his or hers reasons to confront the old master. Utilising everything their mentor taught them, and harnessing the powers of combat magic, pyromancy and dark arts - Palmer, Urd and Kirsten must now put their hard earned skills to the test.

Get ready for three explosive episodes - each revolving around a different Warlock with their own skills, perks and arsenal, and featuring a distinct setting, menagerie of deadly monsters, requisite boss hulking in the darkness and more secrets, weapon upgrades, pickups and jumping, strafing, and spraying trigger happy action that you can shake a lightning staff at.

Where can I buy a Project Warlock 2 Key?

With GameGator, you are able to compare deals across verified and trusted stores to find the cheapest Project Warlock 2 Key for a fair price. All stores currently listed have to undergo very specific testing to ensure that customer support, game deliveries, and the game keys themselves are of the highest quality. To sweeten the deal, we offer you specific discount codes, which you will not be able to find anywhere else. This allows us to beat all competitor prices and provide you with the cheapest, most trustworthy deals. If the current cheapest price for Project Warlock 2 is too high, create a price alert and we will alert you through email, SMS, or discord the moment the Project Warlock 2 price matches your budget.

Can I play Project Warlock 2 immediately after the purchase?

What store should I choose for the best Project Warlock 2 Deal?