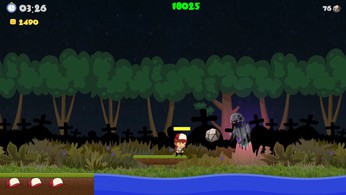 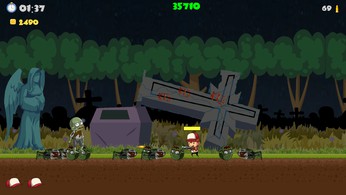 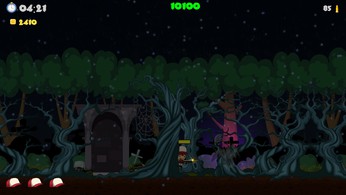 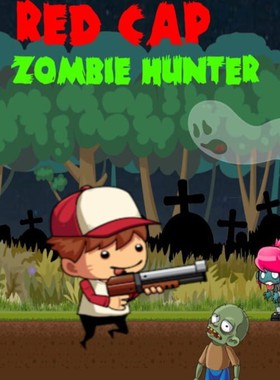 The story that inspires the game is very typical: virus attacks mankind turning most of them into zombies only a few, the strongest one, manage to overcome the virus and remain as normal people. From a central office in the city, a Human Resistence leader, hires Red Cap as ZOMBIE HUNTER. In order to meet the leader of the resistance, Red Cap must travel to the city where at the top of a skyscrape is the barracks, continually besieged by zombies, of the Anti-Zombies Army.

The travel to the city is divided into 2 stages of 5 levels each.

In the first stage, Red Cap decides to take the shortest path to the city, which is the one through the cemetery. There he will face the first zombies, enter a royal tomb and explore the catacombs until he finds the exit and can quickly head towards the city.

In the second stage, when he finally reaches the city, he finds a bleak panorama: in the parks the children have already become zombies, the citizens who are still normal and the zombies share the streets. When he passed a construction site, the zombie workers tried to eat him. Some policemen turned into zombies fire their guns. Red Cap will be forced to use the subway to avoid the streets and get to the Anti-Zombies Army (AZA) office as soon as possible.

With the coins and treasures that Red Cap will find along the way in the game shop, you can buy, among other things, such fun devices as eShield (Electronic Shield), Laser Wheel or a Robot that will accompany you as your faithful friend.

Where can I buy a Red Cap Zombie Hunter Key?

With GameGator, you are able to compare 3 deals across verified and trusted stores to find the cheapest Red Cap Zombie Hunter Key for a fair price. All stores currently listed have to undergo very specific testing to ensure that customer support, game deliveries, and the game keys themselves are of the highest quality. To sweeten the deal, we offer you specific discount codes, which you will not be able to find anywhere else. This allows us to beat all competitor prices and provide you with the cheapest, most trustworthy deals. If the current cheapest price of $5.75 for Red Cap Zombie Hunter is too high, create a price alert and we will alert you through email, SMS, or discord the moment the Red Cap Zombie Hunter price matches your budget.

Can I play Red Cap Zombie Hunter immediately after the purchase?

What store should I choose for the best Red Cap Zombie Hunter Deal?