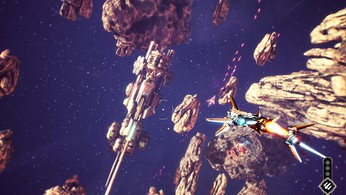 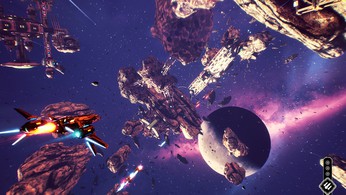 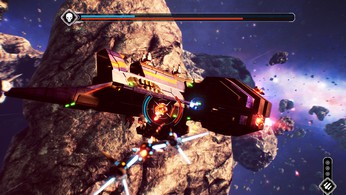 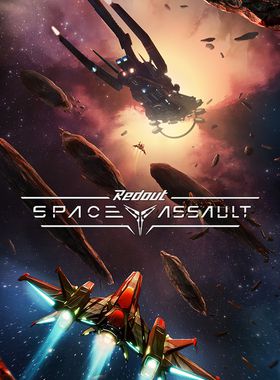 Redout: Space Assault puts you in control of a Super Orbital Recon Fighter during the 2395 Colonization of Mars: dive in the fastest, most epic and exciting arcade space battle you can experience. Outsmart, outmaneuver, overpower, outclass your opponents in lightning-fast, adrenaline-inducing single-player space combat.

You play as Leon Barret, ace fighter pilot of the Poseidon Security Forces. Here at Poseidon Corp., we are trying to pave the way for the colonization of Mars, as mankind is struggling for survival, split between a depleted hot Earth and a cold, claustrophobic Lunar colony. Your job is to maintain order by eradicating rebels and space pirates, facilitate our scientists' research while keeping them safe, and protect all our personnel from the numerous external threats.

Dive down into gigantic asteroid mining plants, shoot down Rebel drones and fighters, roll left and right avoiding enemy fire, unleash impossibly powerful missile volleys, but also race against stray pilots and space scavengers at breakneck speed for the sheer thrill of it.

Where can I buy a Redout: Space Assault Deluxe Edition Key?

With GameGator, you are able to compare deals across verified and trusted stores to find the cheapest Redout: Space Assault Key for a fair price. All stores currently listed have to undergo very specific testing to ensure that customer support, game deliveries, and the game keys themselves are of the highest quality. To sweeten the deal, we offer you specific discount codes, which you will not be able to find anywhere else. This allows us to beat all competitor prices and provide you with the cheapest, most trustworthy deals. If the current cheapest price of $13.01 for Redout: Space Assault is too high, create a price alert and we will alert you through email, SMS, or discord the moment the Redout: Space Assault price matches your budget.

Can I play Redout: Space Assault Deluxe Edition immediately after the purchase?

What store should I choose for the best Redout: Space Assault Deluxe Edition Deal?