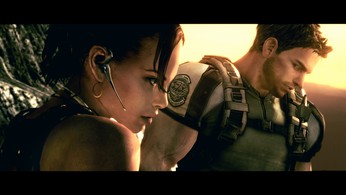 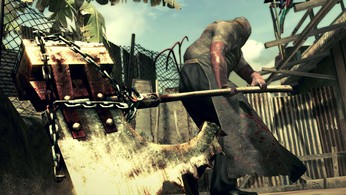 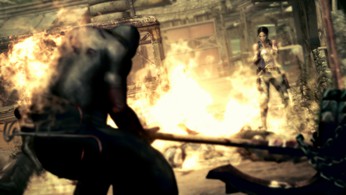 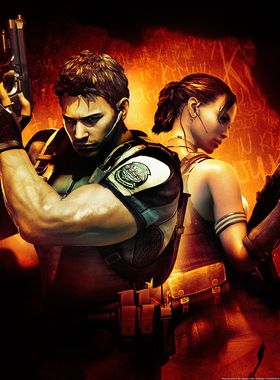 Chris Redfield is an agent of B.S.A.A. This paramilitary organization is dedicated to the fight against bio-organic weapons, with special attention to the creations of the Umbrella Group. Although this pharmaceutical company no longer exists (thanks to the efforts of the agents in the previous games), the danger is still immense, as many of the bio-weapons have fallen into the hands of unscrupulous terrorists. The so-called T-virus, in particular, poses a huge threat, as it turns ordinary people into brainless fighting machines that attack anything that is not infected. When Chris now learns about a planned arms deal in the (fictitious) African nation of Kijuju, he travels there to investigate the events together with the local African agent Sheva Alomar and to stop the arms trade. The two quickly fall into a horror scenario and have to face a fight to the death. "Resident Evil 5" is quite similar to the previous game (part 4). Once again, you fight your way through hordes of mutated enemies from an over-the-shoulder perspective and penetrate deeper and deeper into a dark story. The plot is extremely action-oriented, from the subtle narrative structure of the first three parts one has, as already in the predecessor, mostly said goodbye. Nevertheless, the game always manages to maintain a threatening, tense atmosphere. Behind every bend, dangers lurk, be it hordes of zombies or one of the numerous intermediate enemies. These range from particularly powerful chainsaw-wielding zombies to huge creatures, not unlike the trolls in Tolkien's Lord of the Rings, and grotesque monsters of all shapes and sizes. "Resident Evil 5" offers a great deal of variety here. And that's what makes the game exciting over long distances. "Resident Evil 5" offers solid action entertainment for adult gamers. Even though there are hardly any innovations compared to the predecessor, the game offers enough to keep you entertained over a longer period of time. Just the possibility to play the game with a friend is fascinating. The story of the infection by the T-virus is confidently told and is also quite exciting.

Where can I buy a Resident Evil 5 Gold Edition Key?

With GameGator, you are able to compare 25 deals across verified and trusted stores to find the cheapest Resident Evil 5 Key for a fair price. All stores currently listed have to undergo very specific testing to ensure that customer support, game deliveries, and the game keys themselves are of the highest quality. To sweeten the deal, we offer you specific discount codes, which you will not be able to find anywhere else. This allows us to beat all competitor prices and provide you with the cheapest, most trustworthy deals. If the current cheapest price of $4.92 for Resident Evil 5 is too high, create a price alert and we will alert you through email, SMS, or discord the moment the Resident Evil 5 price matches your budget.

Can I play Resident Evil 5 Gold Edition immediately after the purchase?

What store should I choose for the best Resident Evil 5 Gold Edition Deal?