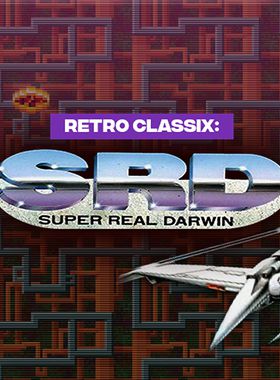 In a galaxy far away, the technologically advanced planet of Lakya faces a crisis. Its inhabitants have unknowingly untethered the planet's life force, Evol, which now radiates away from the planet. When the Evol force reaches the nearby planet Cokyo, its inhabitants initiate their plans to invade Lakya. Now, Lakya must fight back against the invader using their most advanced war machines.

Take control of a small fighter ship with big possibilities. This living ship can evolve, transform and upgrade itself to fit different scenarios by collecting the DNA of defeated enemies. Use power-ups to increase your ship's speed, boost your weapons and gain an edge over the enemy. Super Real Darwin is a fast-paced, vertical scrolling shoot-em-up that rewards skill and persistence; the perfect cult classic for the hardcore fan.

Where can I buy a Retro Classix: SRD - Super Real Darwin Key?

With GameGator, you are able to compare 3 deals across 3 verified and trusted stores to find the cheapest Retro Classix: SRD - Super Real Darwin Key for a fair price. All stores currently listed have to undergo very specific testing to ensure that customer support, game deliveries, and the game keys themselves are of the highest quality. To sweeten the deal, we offer you specific discount codes, which you will not be able to find anywhere else. This allows us to beat all competitor prices and provide you with the cheapest, most trustworthy deals. If the current cheapest price of $6.76 for Retro Classix: SRD - Super Real Darwin is too high, create a price alert and we will alert you through email, SMS, or discord the moment the Retro Classix: SRD - Super Real Darwin price matches your budget.

Can I play Retro Classix: SRD - Super Real Darwin immediately after the purchase?

What store should I choose for the best Retro Classix: SRD - Super Real Darwin Deal?