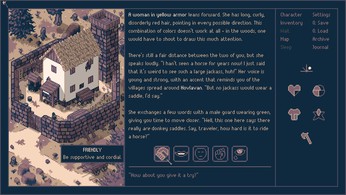 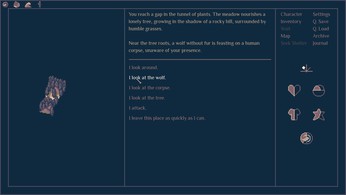 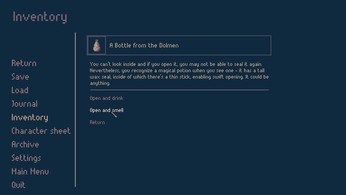 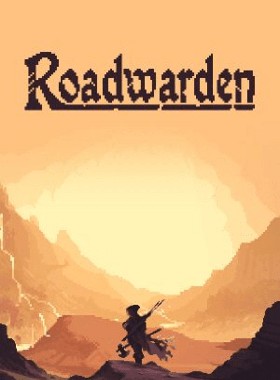 You are a Roadwarden, a brave stranger putting their life in danger to make a difference in a grim fantasy world. While most people would never risk a solitary journey through the wilder parts of the land, you willingly accept the struggle. You guard travellers, connect isolated villages, support merchants, and repel attacking creatures, bandits, or even undead. A powerful merchant guild has called on your services, sending you on a journey into the unknown planes of a mysterious peninsula in the hopes to expand the guild's influence even further. You are meant to explore this place and gather as much information as possible to reveal the secrets surrounding the area. It's a dangerous task, but an equally respectable one.

Other then that, your character will pursue a unique goal selected by you, such as wealth or fame. But do you have the courage to meet all the requirements that define a roadwarden? Roadwarden is an illustrated text-based RPG that uses isometric pixel art and combines mechanics borrowed from RPGs, Visual Novels, adventure games, and interactive fiction, such as inventory puzzles, dialogue choices, character abilities and progression, hit points. simple survival mechanics. or quests restricted by in-game time.

Discover the secrets and face the vast challenges of a hostile fantasy world – inevitably unveiling its uniquely fierce lore. Create your own background, abilities, beliefs, and personality to shape your very own future as a roadwarden. Prepare yourself for an adventurous journey, either as a warrior, mage, or scholar and define your character's attitudes, like friendly, playful or intimidating, during interactions with NPCs. Immerse yourself in profound dialogues and sidequests with dozens of NPCs to gain their trust and support. Use your savvy and be witty when investigating and drawing your conclusions to understand the true nature of this world. The world is full of dangers and nobody can be trusted. Be the roadwarden you want to be and find your path to success against all odds!

Where can I buy a Roadwarden Key?

With GameGator, you are able to compare 14 deals across verified and trusted stores to find the cheapest Roadwarden Key for a fair price. All stores currently listed have to undergo very specific testing to ensure that customer support, game deliveries, and the game keys themselves are of the highest quality. To sweeten the deal, we offer you specific discount codes, which you will not be able to find anywhere else. This allows us to beat all competitor prices and provide you with the cheapest, most trustworthy deals. If the current cheapest price of $6.58 for Roadwarden is too high, create a price alert and we will alert you through email, SMS, or discord the moment the Roadwarden price matches your budget.

Can I play Roadwarden immediately after the purchase?

What store should I choose for the best Roadwarden Deal?