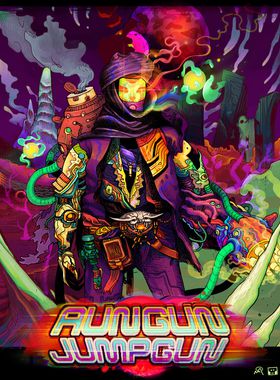 RunGunJumpGun is a tough as nails 2D Action Platformer that puts a teeth-rattling, gravity-defying weapon in your hands. With a cast of crazed characters, simple but beautifully difficult gameplay, and a pulsing musical score, RunGunJumpGun is a loud, trippy mess of twitchy platforming goodness.

The two-button setup is treacherously simple. One button shoots your massive gun downwards, propelling you through the air. The other shoots forward, destroying anything that's in your path. But there is no stopping in this beautifully surreal world littered with deadly traps and soul-crushing obstacles around every corner. Players will have to constantly alternate between the two firing modes to maneuver through meticulously crafted levels where death is a promise not a possibility. There is only running, gunning, jumping, and gunning, in a mad dash to survive long enough to die again.

The game takes place in the Extax System, a solar system where the Sun has begun to swell and devour planets. With most of the planets already devoured, the remaining worlds have descended into madness and superstition. Each denizen has their own theory on why the sun seems so enraged, but they all hang on one central element: Atomiks, the primary resource in the entire system.

You play as a scavenger, a rogue from outside the Extax System who seems to have only one goal: get Atomiks. What do the Atomiks mean to the scavenger? Does he want to scoop up precious resources for himself, or use them as a way to appease the sun and end the suffering of the system? Or Maybe they're just shiny pick-ups in a video game to him.

Where can I buy a RunGunJumpGun Key?

With GameGator, you are able to compare 5 deals across verified and trusted stores to find the cheapest RunGunJumpGun Key for a fair price. All stores currently listed have to undergo very specific testing to ensure that customer support, game deliveries, and the game keys themselves are of the highest quality. To sweeten the deal, we offer you specific discount codes, which you will not be able to find anywhere else. This allows us to beat all competitor prices and provide you with the cheapest, most trustworthy deals. If the current cheapest price of $1.06 for RunGunJumpGun is too high, create a price alert and we will alert you through email, SMS, or discord the moment the RunGunJumpGun price matches your budget.

Can I play RunGunJumpGun immediately after the purchase?

What store should I choose for the best RunGunJumpGun Deal?