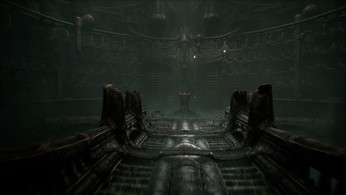 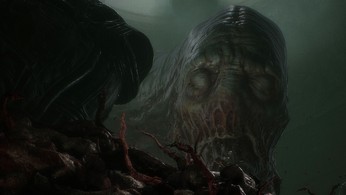 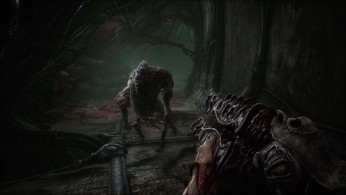 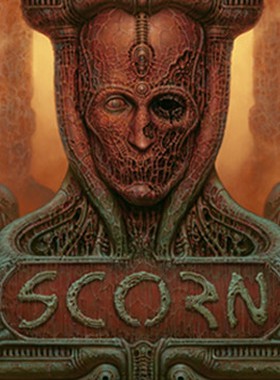 corn is an atmospheric first-person horror adventure game set in a nightmarish universe of odd forms and somber tapestry. It is designed around the idea of "being thrown into the world". Isolated and lost inside this dream-like world, you will explore different interconnected regions in a non-linear fashion. The unsettling environment is a character itself.

Every location contains its own theme (story), puzzles and characters that are integral in creating a cohesive world. Throughout the game you will open up new areas, acquire different skill sets, weapons, various items and try to comprehend the sights presented to you.

Scorn takes place in an open-ended world with different interconnected regions. Each region is a maze-like structure with various rooms and paths to discover. All the storytelling happens in-game, with no cut-scenes to distract you from the grisly reality of the living, breathing world you're in. But keep your eyes open - the game won't show you any sympathy if you miss something important on your uneasy travels.

Players will experience better immersion being aware of the character's body and movement. Interaction with the world is realistic - objects are picked up with your hands (instead of just floating in midair), machines and instruments are operated by grabbing the controls, etc.

Your loadout is defined and limited. This plays a big role in keeping the player in an even greater state of awareness throughout the whole game. Players will have to think about when to fight and when to take cover and how their actions affect the world around them. Different play styles will be needed to advance.

Where can I buy a Scorn Key?

With GameGator, you are able to compare 49 deals across verified and trusted stores to find the cheapest Scorn Key for a fair price. All stores currently listed have to undergo very specific testing to ensure that customer support, game deliveries, and the game keys themselves are of the highest quality. To sweeten the deal, we offer you specific discount codes, which you will not be able to find anywhere else. This allows us to beat all competitor prices and provide you with the cheapest, most trustworthy deals. If the current cheapest price of $13.43 for Scorn is too high, create a price alert and we will alert you through email, SMS, or discord the moment the Scorn price matches your budget.

Can I play Scorn immediately after the purchase?

What store should I choose for the best Scorn Deal?