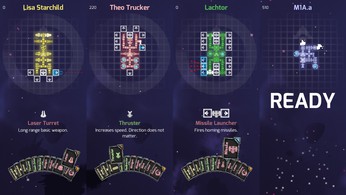 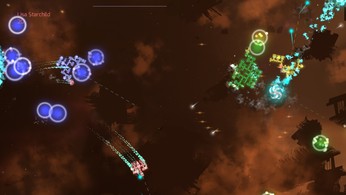 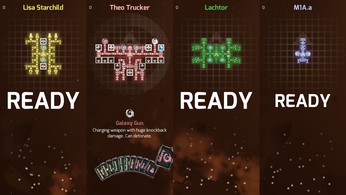 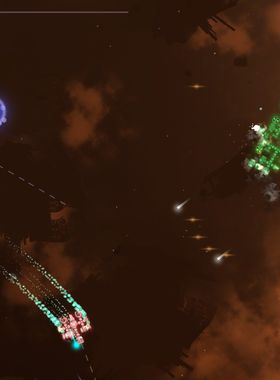 Scrap Galaxy is a local build-and-destroy deathmatch game for up to 4 players. It is a 2D top-down shooter taking place out in space in a galactic junkyard. In this setting, the players are trying to survive by constructing space ships.

The game is round-based and each round is divided up into two phases: build phase and battle phase. During the build phase, each player gets a number of components and has to assemble a spaceship from them within a certain time limit. During the battle phase, the players pilot the ships. They battle against the other or team up against the garbage drones living in the junkyard.

The randomness and unpredictable nature of the game makes every round into a new challenge, because you always have a new ship to battle with, raising the stakes and making the game quite addictive.

Deathmatch until only one player remains. A new ship is constructed each round.

Scrap King is like Deathmatch but the winner keeps their ship and can continue to build on it.

Co-op allows the players to fight together against garbage drones. The players continues to build on their ships after each wave of enemies.

Bots fill lasts slots if you are less than 4 people playing.

Where can I buy a Scrap Galaxy Key?

With GameGator, you are able to compare deals across verified and trusted stores to find the cheapest Scrap Galaxy Key for a fair price. All stores currently listed have to undergo very specific testing to ensure that customer support, game deliveries, and the game keys themselves are of the highest quality. To sweeten the deal, we offer you specific discount codes, which you will not be able to find anywhere else. This allows us to beat all competitor prices and provide you with the cheapest, most trustworthy deals. If the current cheapest price of $7.99 for Scrap Galaxy is too high, create a price alert and we will alert you through email, SMS, or discord the moment the Scrap Galaxy price matches your budget.

Can I play Scrap Galaxy immediately after the purchase?

What store should I choose for the best Scrap Galaxy Deal?