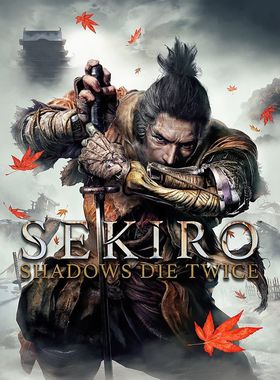 In Sekiro: Shadows The Twice you are the "one-armed wolf", a disgraced, mutilated warrior who barely escaped death. You have sworn to protect a young nobleman of an old bloodline and are a thorn in the side of many, including the dangerous Ashina clan. When your master is kidnapped, nothing can stop you from regaining your honour - not even death.

Experience the Sengoku Japan of the late 16th century, a time of brutal conflicts and battles to the death. In this dark world, you'll have to confront larger-than-life enemies with an arsenal of deadly prosthetic tools and powerful ninja skills. Ninja secrecy, vertical locomotion, and merciless head-to-head battles merge into a bloody confrontation.

A game like Sekiro, which is not a simple action video game where hitting is the only thing that matters, must be supported by a strong story and, therefore, this must be considered as the essential basis of the whole title.

Sekiro has the hallmark of Miyazaki, one of the most important video game story developers of all time. The title puts us in the shoes of a shinobi from the Sengoku Period during the 16th century in Japan.

This shinobi, whose name is Sekiro and who is also known as the One-Armed Wolf, will have to rescue his young lord from a clan of samurai that does not stop creating problems and, in addition, will have to take revenge for a series of killings that are shown as the perfect prelude to a story that takes place in a world immersed in war and barbarism.

We can't and don't want to tell you much more either, because Sekiro's story is full of plot twists, secrets and little plots that are a big plus in this game, so the best thing you can do is discover it on your own.

Of course, we also want to point out here that the work of setting and designing the scenarios is excellent. The graphic section of Sekiro Shadows die Twice PS4, Xbox and PC is most praiseworthy, so we are facing a game that has managed to get all the best of a generation of consoles that can be found at present in its peak.

The textures, the development of the cities of feudal Japan and even the characterizations of samurai and other characters is one of the points that critics have highlighted in this game and therefore should not be overlooked when evaluating it.

All this contributes to reinforce the story, and is that the scenarios become a natural part of the development of the plot that allows players to immerse themselves in a universe of the most spectacular.

Well, now that you know everything about the new game From Software, which was released in March 2019, you should consider whether there are other games that offer something similar to this.

This will not only help you find an alternative to buy instead of Sekiro, you can also take advantage of what we are going to tell you here to spend more hours in front of the console if you have liked Sekiro, and that is that all video games, after all, are compatible with each other.

A good example of what we are telling you is the entire Dark Souls saga, although very especially the third and final installment of this saga. If you haven't played these games on PS4 or Xbox One before, the truth is that you will be surprised to learn that Sekiro has a lot of them. Game dynamics, character control and much more, and the fact is that all Dark Souls are also produced by From Software as we have already told you.

We also don't want to stop recommending you another classic of the RPG genre like The Witcher 3. This title has its years, but the truth is that it has been kept in perfect condition because it has one of the best stories in the videogame world.

In addition, The Witcher 3 has a much higher role component, so you can develop the character for hours and hours facing monsters capable of testing your skills as a player.

But if what has caught your attention is Sekiro's setting in Japan, there are other games that will keep you with the catana in your hand without having to move from the Japanese country.

Maybe the best of them all is Ni-Oh which was released in 2017. Due to these years, surely you can find it at a very good price and, the best of all, it has a magnificent atmosphere and some touches of adventure and RPG that will make you remember all the hours that you have been able to spend at the controls playing Sekiro.

Where can I buy a Sekiro: Shadows Die Twice Key?

With GameGator, you are able to compare 9 deals across verified and trusted stores to find the cheapest Sekiro: Shadows Die Twice Key for a fair price. All stores currently listed have to undergo very specific testing to ensure that customer support, game deliveries, and the game keys themselves are of the highest quality. To sweeten the deal, we offer you specific discount codes, which you will not be able to find anywhere else. This allows us to beat all competitor prices and provide you with the cheapest, most trustworthy deals. If the current cheapest price of $38.95 for Sekiro: Shadows Die Twice is too high, create a price alert and we will alert you through email, SMS, or discord the moment the Sekiro: Shadows Die Twice price matches your budget.

Can I play Sekiro: Shadows Die Twice immediately after the purchase?

What store should I choose for the best Sekiro: Shadows Die Twice Deal?