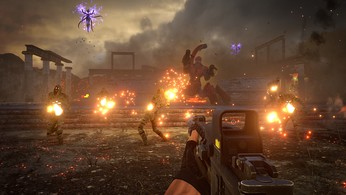 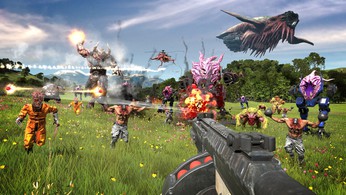 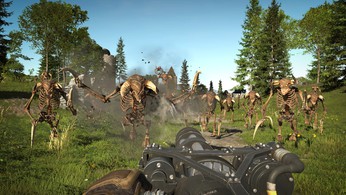 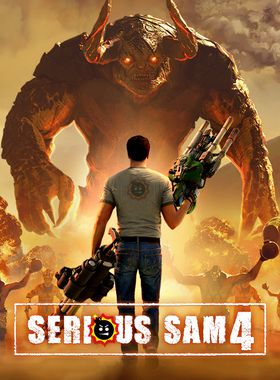 Serious Sam 4 revives the classic FPS series in an energetic prequel with a massive explosives arsenal, intergalactic carnage, and perfectly places jokes. Humanity is under siege. Mental's hordes spread over earth to destroy the remains of a broken and beaten civilisation. The last remaining resistance to the invasion is the Earth Defence Force, led by Sam Serious Stone and his heavily armed unit of weird commandos. Destroy Mental's horde with the powerful double-barrelled shotgun, the devastating Minigun, the brutal chainsaw launcher, a brand new automatic shotgun and the iconic cannon.

Croteam returns to the Serious Sam franchise with an energetic prequel that takes chaos to an unprecedented level. The classic Serious Sam formula has been revamped. With the help of an unstoppable arsenal, the player must face an unimaginable number of enemies and find his way out of hopeless situations.

The Legion System will allow you to fight alongside up to a thousand friends, while the four-player co-op mode allows you to complete the campaign together with other players. Complete exciting primary missions and thrilling side quests in customisable difficulty levels for an extra challenge.

Where can I buy a Serious Sam 4 Deluxe Edition Key?

With GameGator, you are able to compare 15 deals across verified and trusted stores to find the cheapest Serious Sam 4 Key for a fair price. All stores currently listed have to undergo very specific testing to ensure that customer support, game deliveries, and the game keys themselves are of the highest quality. To sweeten the deal, we offer you specific discount codes, which you will not be able to find anywhere else. This allows us to beat all competitor prices and provide you with the cheapest, most trustworthy deals. If the current cheapest price of $16.92 for Serious Sam 4 is too high, create a price alert and we will alert you through email, SMS, or discord the moment the Serious Sam 4 price matches your budget.

Can I play Serious Sam 4 Deluxe Edition immediately after the purchase?

What store should I choose for the best Serious Sam 4 Deluxe Edition Deal?