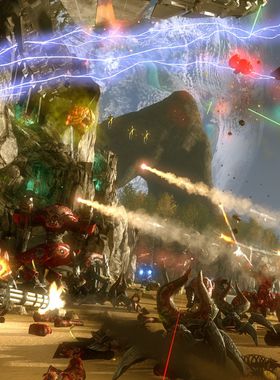 About Serious Sam: The Last Hope

Have you ever wondered what its really like to be Serious Sam? Have you ever wanted to fight Mentals alien hordes with your own two hands? Well, now you can! Step into the shoes of the Earth Defense Forces greatest hero in this unique VR simulation based on Sam Stones own log files from his time as captain of the Battlecruiser Saratoga. Experience the missions that turned Captain Stone into the legend that he is today.

Tons of enemies – Hordes of attacking enemies have always been a trademark of the Serious Sam series, and Serious Sam: The Last Hope continues to deliver countless terrors in just one scene, harnessing the serious power of the Serious Engine 2017.

Tons of guns – Dual-wield miniguns, tommy guns, heavy lasers, shotguns, and an assortment of other guns. Oh, and chainsaws, too! Use 16 different weapons, including the rocket launcher, and Sams trademark alien-killing toy - the minigun. Also, theres a sword and a shield, for good measure.

Planet-hopping action – Visit five unique planets, and battle across treacherous Egyptian sands, in the pitch-dark under ancient ruins, or on the surface of Pladeon, the long-abandoned heart of a great industrial civilization.

Dicks back, too! - Featuring the voice of Serious Sam, John. J. Dick, dropping one-liners almost as fast as you drop your enemies.

Cry for Mummy – Defeat Mentals most powerful servants, starting with the Unholy Space Mummy of Gamma Pegasi, a huge undead monstrosity brought to life with dark magic - as dangerous as it is smelly! And thats just the first boss, and there are five of them - each one more deadly and terrifying than the last.

Upgrade and improve - Evolve your arsenal and yourself, unlocking 36 powerups and 190 weapon upgrades during Sams adventures.

It takes two to tango - Play through any level with a partner, picking between Serious Sam or Serious Sammy as your character of choice.

Randomly Generated Gameplay! - This new gameplay option is split to three different modes. Fight off random waves of enemies that ensure every playthrough is completely different, and challenge yourself in 8 arenas consisting of 4 waves and 20 difficulty settings in the chaotic Arena mode. Face endless waves of enemies, trying to stay alive as long as possible in the Endless Wave mode, or try your luck at the Daily Challenge mode, facing the same challenge as other players around the world on the arena map of the day.

Global Leaderboards - Compare your score and get bragging rights over your friends and foes thanks to global leaderboards supported by each of the Arena modes.

Hyper-immersive realism – Graphics so good that if you die in the simulation, you die in the real world!**Might or might not be entirely true. But we tested it and were pretty sure it works the other way around.

Where can I buy a Serious Sam: The Last Hope Key?

With GameGator, you are able to compare deals across verified and trusted stores to find the cheapest Serious Sam: The Last Hope Key for a fair price. All stores currently listed have to undergo very specific testing to ensure that customer support, game deliveries, and the game keys themselves are of the highest quality. To sweeten the deal, we offer you specific discount codes, which you will not be able to find anywhere else. This allows us to beat all competitor prices and provide you with the cheapest, most trustworthy deals. If the current cheapest price for Serious Sam: The Last Hope is too high, create a price alert and we will alert you through email, SMS, or discord the moment the Serious Sam: The Last Hope price matches your budget.

Can I play Serious Sam: The Last Hope immediately after the purchase?

What store should I choose for the best Serious Sam: The Last Hope Deal?