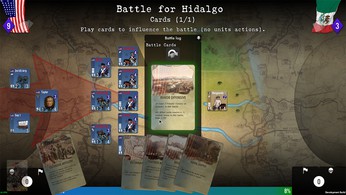 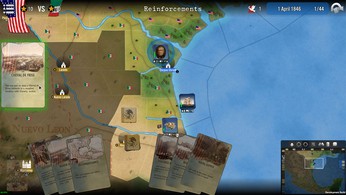 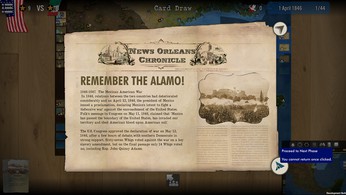 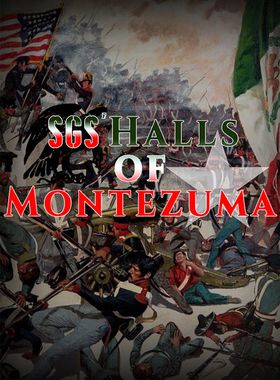 About SGS Halls of Montezuma

Halls of Montezuma recreates the Mexican-American war of 1846-1848. Play the USA and conquer Mexico City before Whig opposition in Congress forces a negotiated peace. As Mexico, hold desperately against the enemy's onslaught, to gain enough time for America's internal politics to end the war.

The Halls of Montezuma game contains several scenarios, covering different periods of the Mexican-American war of 1846-1848. The war was initiated by US President Polk on the premise that the southern border of Texas should be the Rio Grande River, while Mexico claimed that the border was on the Nueces River. The Whig party and many American citizens opposed the war, and this is a decisive factor in the game. A small scenario covers the early stages of the war over the disputed territories in southern Texas and, in the West, in California and New Mexico. Another scenario deals with Scott's famous 1847 campaign, starting with the landing at Vera Cruz till the capture of Mexico city. And, of course, a complete Grand Campaign covers the whole war.

Scenario durations last from 10 turns (for the smaller one) to 44 turns, each representing a two-weeks period between April 1846 and March 1848. One player represents the United States of America's land and naval forces, the other has Mexico's land and Naval forces.

Be careful of the potential weakness of some quality but small units. As the USA, losing regular army units will seriously affect the anti-war sentiment at home. Watch your supply assets, as early success may easily outrun your capacities in the logistical nightmare of Mexico in the early 19th century.

Where can I buy a SGS Halls of Montezuma Key?

With GameGator, you are able to compare 3 deals across 3 verified and trusted stores to find the cheapest SGS Halls of Montezuma Key for a fair price. All stores currently listed have to undergo very specific testing to ensure that customer support, game deliveries, and the game keys themselves are of the highest quality. To sweeten the deal, we offer you specific discount codes, which you will not be able to find anywhere else. This allows us to beat all competitor prices and provide you with the cheapest, most trustworthy deals. If the current cheapest price of $17.46 for SGS Halls of Montezuma is too high, create a price alert and we will alert you through email, SMS, or discord the moment the SGS Halls of Montezuma price matches your budget.

Can I play SGS Halls of Montezuma immediately after the purchase?

What store should I choose for the best SGS Halls of Montezuma Deal?