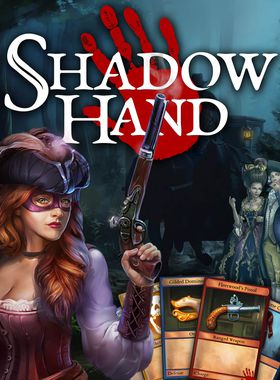 We follow the story of Lady Cornelia Darkmoor, a beguiling young aristocrat who masquerades as the notorious highwaywoman, Shadowhand. Fleeing a crime scene and forced to act under the cover of darkness, Shadowhands mission to safeguard a woman she holds dear leads to a web of corruption, smuggling and blackmail.

Combining an historical visual novel narrative with a card-driven RPG, Shadowhands story spans 22 chapters of atmospheric locations including stormy coastlines, mysterious woods and gloomy manors. Featuring over 150 levels of elegant and intense single-player card action, players must dodge the law and brawl with outlaws in turn-based combat, gaining abilities to customize their character and collect new weapons, gear and loot.

Where can I buy a Shadowhand Key?

With GameGator, you are able to compare 4 deals across verified and trusted stores to find the cheapest Shadowhand Key for a fair price. All stores currently listed have to undergo very specific testing to ensure that customer support, game deliveries, and the game keys themselves are of the highest quality. To sweeten the deal, we offer you specific discount codes, which you will not be able to find anywhere else. This allows us to beat all competitor prices and provide you with the cheapest, most trustworthy deals. If the current cheapest price of $0.38 for Shadowhand is too high, create a price alert and we will alert you through email, SMS, or discord the moment the Shadowhand price matches your budget.

Can I play Shadowhand immediately after the purchase?

What store should I choose for the best Shadowhand Deal?