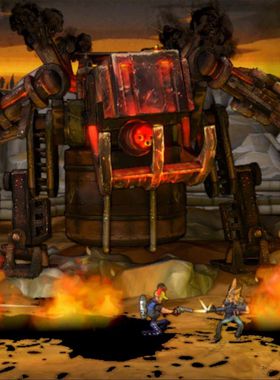 About Shoot Many Robots

The title sums it up pretty well, but if you still need convincing: A 4-player co-op run-n-gun action shooter that throws you into a tidal wave of degenerate robots with an array of weaponry that would make any mama proud. A classic 2.5D side-scrolling shooter, revitalized with modern game design.

You take control of P. Walter Tugnut (The “P” stands for “Pickles”), a regular guy who stockpiles guns, ammo, and beer in his dilapidated RV awaiting the inevitable robot apocalypse. When the abandoned factory in the distance begins producing robots on its own, Walter sets off in his RV on a robot-killing rampage, hoping to save humanity from an onslaught of robot hordes.

Where can I buy a Shoot Many Robots Key?

With GameGator, you are able to compare 6 deals across verified and trusted stores to find the cheapest Shoot Many Robots Key for a fair price. All stores currently listed have to undergo very specific testing to ensure that customer support, game deliveries, and the game keys themselves are of the highest quality. To sweeten the deal, we offer you specific discount codes, which you will not be able to find anywhere else. This allows us to beat all competitor prices and provide you with the cheapest, most trustworthy deals. If the current cheapest price of $20.32 for Shoot Many Robots is too high, create a price alert and we will alert you through email, SMS, or discord the moment the Shoot Many Robots price matches your budget.

Can I play Shoot Many Robots immediately after the purchase?

What store should I choose for the best Shoot Many Robots Deal?