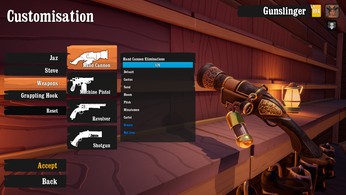 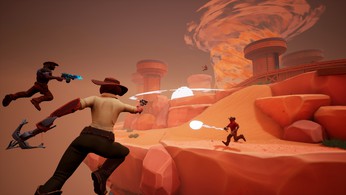 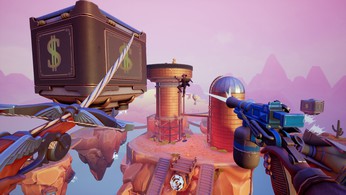 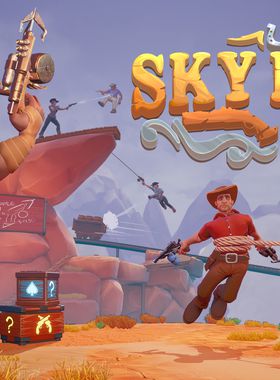 Grab your hat, lasso, and grappling hook, and get ready for a high-flying Wild West showdown! Taking place in a reinvented Wild West universe where the frontier floats among the clouds, Sky Noon players take the role of hired gunslingers that battle opposing cartel fighters in the sky. There are no health meters in Sky Noon; instead players use various super-powered compressed air weapons to send enemies flying out of their boot spurs! Grappling hooks and lassos are literal lifelines preventing players from falling off into the great blue sky.

Combined with other items like steam-powered jetpacks, jump pads, and teleporters, cowboys need to be quick on the draw and light on their boots in the fast-paced, aerial mayhem of Sky Noon. Make use of devices powered by super-compressed air to fling opponents off levels – knock them varmints straight to the moon! Freely move throughout the floating levels by using quick-firing grappling hooks. Take advantage of jump pads for quick long leaps and lasso cowboys back to levels. Additional items like teleporters and air-powered jet boots can give a tactical advantage or help escape a close brush with death.

2-6 players can jump into modes like Free For All, Team Deathmatch, King of the Hill, and Cart, with more game modes coming in the near future. Personalize Sky Noon gunfights with over 50 different game server options. Pack more punch to melee attacks, remove random crates, turn on infinite ammo, increase spawn rates on all items, and much more. With the land dried up and cracked, the denizens of the West look to the clouds for the last vestiges of water. Crafting technology to raise their lands into the sky, opposing factions now battle for control over the Floating Frontier.

Where can I buy a Sky Noon Key?

With GameGator, you are able to compare 6 deals across verified and trusted stores to find the cheapest Sky Noon Key for a fair price. All stores currently listed have to undergo very specific testing to ensure that customer support, game deliveries, and the game keys themselves are of the highest quality. To sweeten the deal, we offer you specific discount codes, which you will not be able to find anywhere else. This allows us to beat all competitor prices and provide you with the cheapest, most trustworthy deals. If the current cheapest price of $9.24 for Sky Noon is too high, create a price alert and we will alert you through email, SMS, or discord the moment the Sky Noon price matches your budget.

Can I play Sky Noon immediately after the purchase?

What store should I choose for the best Sky Noon Deal?