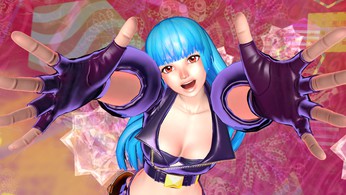 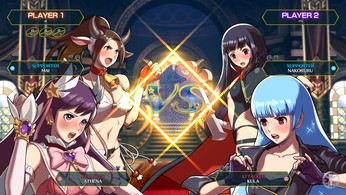 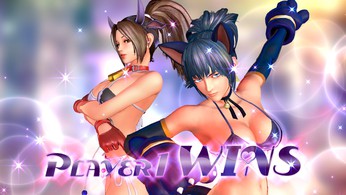 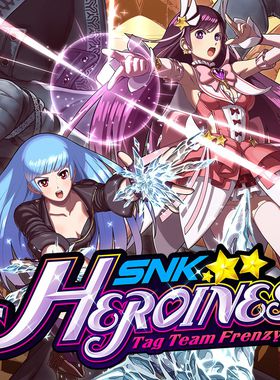 Take control of SNK's most iconic female characters and battle it out in this crazy tag fighting game featuring a plethora of cute costumes and accessories! With one button special moves and a deep but simplified combo system this is a great game for fighting game fans and newcomers alike! A brand new style of fighting action has arrived!

A legendary roster of SNK Heroines have found themselves trapped in a mysterious mansion! The 14 heroines will have to work together to escape, all while wearing a variety of cute and sexy costumes!

Your tag team is able to seamlessly switch between the Attacker position in the front and the Supporter position in the back! Are you a newcomer to the fighting game genre? SNK Heroines features a simplified one button special move system and a variety of items to keep the matches simple but tactical!

When your opponent's gauge turns red, that's your chance to clinch victory with a cinematic Dream Finish! Customize your favorite heroines with 3 costumes, 4 voice styles and more than 140 accessories.

Where can I buy a SNK HEROINES Tag Team Frenzy Key?

With GameGator, you are able to compare 7 deals across verified and trusted stores to find the cheapest SNK HEROINES Tag Team Frenzy Key for a fair price. All stores currently listed have to undergo very specific testing to ensure that customer support, game deliveries, and the game keys themselves are of the highest quality. To sweeten the deal, we offer you specific discount codes, which you will not be able to find anywhere else. This allows us to beat all competitor prices and provide you with the cheapest, most trustworthy deals. If the current cheapest price of $8.46 for SNK HEROINES Tag Team Frenzy is too high, create a price alert and we will alert you through email, SMS, or discord the moment the SNK HEROINES Tag Team Frenzy price matches your budget.

Can I play SNK HEROINES Tag Team Frenzy immediately after the purchase?

What store should I choose for the best SNK HEROINES Tag Team Frenzy Deal?