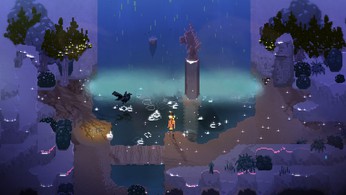 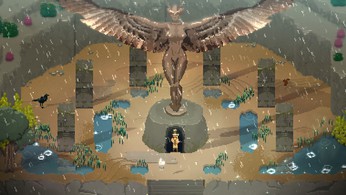 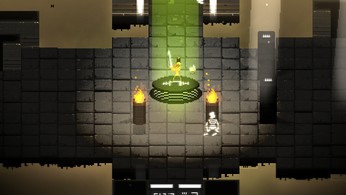 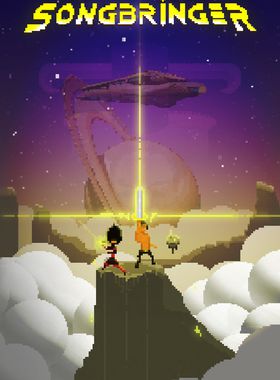 Songbringer is a scifi action RPG with swords, secrets, dungeons, bosses and stuff.

You play the role of protagonist and accidental hero, Roq Epimetheos. With a propensity for partying and making music, he cruises the galaxy with his skybot Jib aboard the ship Songbringer, searching for verdant planets absent the presence of galactic police.

When Roq finds the nanosword hidden in a cave on Ekzerra, he unwittingly awakens an ancient evil. The sword is pretty fraggin sweet though. It... hums. Jib, the SkybotJib began life as a human boy on the skycity planet Yuerder. Growing up, he took an interest in programming artificial intelligence, eventually making a career for himself. On his deathbed, he illegally transferred his consciousness into a skybot, destroying the consciousness link thereby preventing overwrite.

Jib scans the bodies of your fallen foes, sometimes uncovering valuable loot. He can also gain the ability to stun foes. Jib is automatically controlled by AI, or player two can play Jib in local co-op mode.

Lacking the ability to grow one as a human, Jib is obsessed with mustaches.

Where can I buy a Songbringer Key?

With GameGator, you are able to compare 8 deals across verified and trusted stores to find the cheapest Songbringer Key for a fair price. All stores currently listed have to undergo very specific testing to ensure that customer support, game deliveries, and the game keys themselves are of the highest quality. To sweeten the deal, we offer you specific discount codes, which you will not be able to find anywhere else. This allows us to beat all competitor prices and provide you with the cheapest, most trustworthy deals. If the current cheapest price of $1.46 for Songbringer is too high, create a price alert and we will alert you through email, SMS, or discord the moment the Songbringer price matches your budget.

Can I play Songbringer immediately after the purchase?

What store should I choose for the best Songbringer Deal?