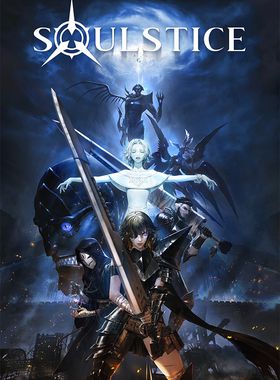 The balance of the Holy Kingdom of Keidas is compromised when powerful, feral creatures known as "Wraiths" invade from the other side of the Veil, threatening to consume the living. Wraiths corrupt their victims and can even possess their bodies, turning into unstoppable monsters that prey upon the common folk. The "Chimeras", hybrid warriors born of the union of two souls, are the only ones who can protect humankind.

Briar and Lute are two sisters who have been reborn as a Chimera. The transformation has granted Briar superhuman strength and resilience, while Lute, who was sacrificed in order to bind her soul to her sister's, has become a ghost with mystical powers. Voiced by Stefanie Joosten (Metal Gear Solid 5), Briar and Lute are sent on a mission to reclaim a city in ruins that has been ravaged by the Wraiths, only to discover that the Order they belong to has a far more complex plan in mind.

Fight in synergy - Manage both characters simultaneously. Briar masters melee attacks and combos, while Lute controls the battlefield with her otherworldly abilities. Combine their strengths to unlock powerful transformations and fulfill their true potential as a Chimera.

Customize weapons and abilities - Weapons are unlocked and upgraded throughout the game and can be switched even in the middle of a combo to deal greater damage to opponents.

Explore the city of Ilden - Discover puzzles and secrets in diverse locations within a troubled city in ruins. A Tear in the Sky has opened above Ilden; as Briar and Lute get closer to it, their surroundings become more menacing and twisted.

Where can I buy a Soulstice Key?

With GameGator, you are able to compare 7 deals across verified and trusted stores to find the cheapest Soulstice Key for a fair price. All stores currently listed have to undergo very specific testing to ensure that customer support, game deliveries, and the game keys themselves are of the highest quality. To sweeten the deal, we offer you specific discount codes, which you will not be able to find anywhere else. This allows us to beat all competitor prices and provide you with the cheapest, most trustworthy deals. If the current cheapest price of $32.73 for Soulstice is too high, create a price alert and we will alert you through email, SMS, or discord the moment the Soulstice price matches your budget.

Can I play Soulstice immediately after the purchase?

What store should I choose for the best Soulstice Deal?