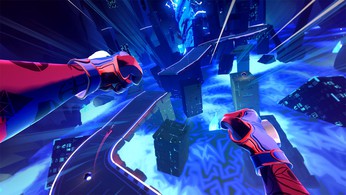 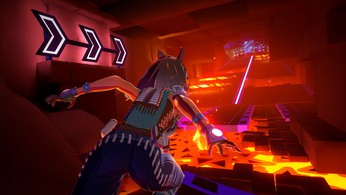 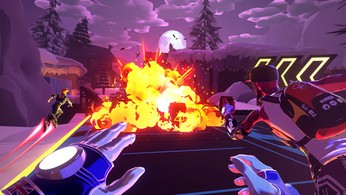 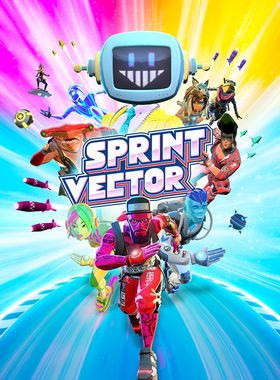 The most popular game show in the universe is always scouting for stars...and its newest and brightest is YOU!

Hosted by everyone's favorite robo-personality, Mr. Entertainment, Sprint Vector sends its intrepid contestants running, jumping, climbing, flinging, drifting, and even flying across crazy interdimensional race courses and challenge maps where your speed and finesse are put to the test. These intense head-to-head matches have become the must-see event of the millennium!

Sprint Vector is the ultimate competitive VR game: a multiplayer adrenaline platformer that merges the physical thrill of extreme sports competition with the unhinged energy of a zany game show spectacle. Survios' innovative Fluid Locomotion System lets you comfortably attain and maintain extreme speeds in VR. Use your entire body to run, jump, drift, zip, climb, fling, shoot, dodge, and fly with intuitive motion controls! Add in a pulsing electronic soundtrack, hilarious running commentary, powerful projectiles and boosts, as well as multiplayer support for up to eight players, and you've got a hit show no matter what planet you're on!

Step into the vector blades of an intergalactic star, rev up, and explode onto Sprint Vector's colorful landscapes on a variety of races courses and challenge maps. Scale towering pyramids and plunge into alien ruins, leap across giant pits while dodging debilitating blobs of sludge, or survive the trap-riddled roads of an ancient city—but watch out for your fellow sprinters! It's just one slow mine, nitro, or impulse jump between glory and defeat.

Competitive multiplayer matches: Public and private online multiplayer modes pit up to eight players against each other in intense, high-speed races as you vie for a spot on the Global Leaderboards.

Weapons and Power-Ups: What's a little friendly competition without a bit of self-serving sabotage? Take aim at both the course and your competitors with glove blasts and game-changing power-ups.

Eight intergalactic competitors: Choose from eight colorful characters “recruited” from every corner of the galaxy, from notorious Daxx to ethereal Luna to streetwise Hendrix, each with multiple skins.

Where can I buy a Sprint Vector Key?

With GameGator, you are able to compare 7 deals across verified and trusted stores to find the cheapest Sprint Vector Key for a fair price. All stores currently listed have to undergo very specific testing to ensure that customer support, game deliveries, and the game keys themselves are of the highest quality. To sweeten the deal, we offer you specific discount codes, which you will not be able to find anywhere else. This allows us to beat all competitor prices and provide you with the cheapest, most trustworthy deals. If the current cheapest price of $1.36 for Sprint Vector is too high, create a price alert and we will alert you through email, SMS, or discord the moment the Sprint Vector price matches your budget.

Can I play Sprint Vector immediately after the purchase?

What store should I choose for the best Sprint Vector Deal?