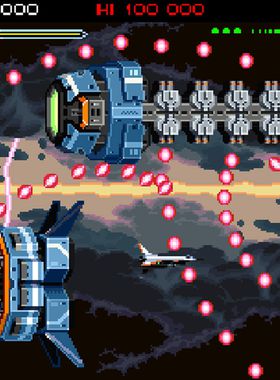 Starr Mazer is a modernized fusion of 2 classic genres: The point-and-click (PNC) adventure and horizontal scrolling shoot em up (SHMUP). The game is highly replayable as both the PNC story and SHMUP levels of each playthrough are procedurally generated and significantly different each time. In this regard it is different from traditional PNC Adventures, which were linear in their storytelling and did not yield anything new on subsequent playthroughs.

The narrative progression of each playthrough uses Open-Middled Gameplay (OMG!) in that the story modules kick off predictably and the endings are varied and satisfying, but what happens in between is up to the predetermination of the story creation algorithm as well as the choices the player makes, performance in the SHMUP segments and a host of other environmental / chronological / enigmatic variables.

Though procedural, both the PNC and SHMUP segments of Starr Mazer are highly crafted to provide an engaging, beautiful, exciting and replayable experience. Great care has been put into the modular PNC story engine and SHMUP level assembly.

Where can I buy a Starr Mazer Key?

With GameGator, you are able to compare deals across verified and trusted stores to find the cheapest Starr Mazer Key for a fair price. All stores currently listed have to undergo very specific testing to ensure that customer support, game deliveries, and the game keys themselves are of the highest quality. To sweeten the deal, we offer you specific discount codes, which you will not be able to find anywhere else. This allows us to beat all competitor prices and provide you with the cheapest, most trustworthy deals. If the current cheapest price for Starr Mazer is too high, create a price alert and we will alert you through email, SMS, or discord the moment the Starr Mazer price matches your budget.

Can I play Starr Mazer immediately after the purchase?

What store should I choose for the best Starr Mazer Deal?