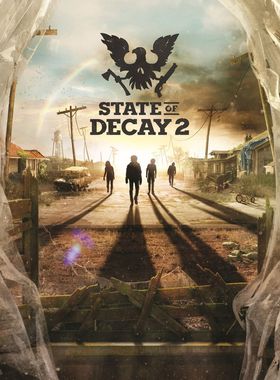 About State of Decay 2

How Will You Survive?

The dead have risen and civilization has fallen. Not even the military could stop the zombies, and now its up to you to gather survivors and build a community in a post-apocalyptic world – a world where every decision matters, and where you define what it means to survive.

State of Decay 2 is the ultimate zombie survival game in an open world where you and up to three friends build a community of survivors. It's up to you to establish a base, develop your characters' abilities, and manage resources to survive as a group in a world where choices matter and every decision has lasting consequences.

Every player's experience is unique - as you play, the open world responds to your decisions, developing in real time and dynamically offering new opportunities for you to demonstrate your own personal survival priorities. These decisions also result in real consequences that affect your community. Send your best scavenger across the map to gather medicine for a sick friend... but know that they might not make it home. Help your neighbors, and you might make new allies... or you could decide that you need their food supply more than they do. In the end, how you survive might surprise you.

Where can I buy a State of Decay 2 Key?

With GameGator, you are able to compare 3 deals across verified and trusted stores to find the cheapest State of Decay 2 Key for a fair price. All stores currently listed have to undergo very specific testing to ensure that customer support, game deliveries, and the game keys themselves are of the highest quality. To sweeten the deal, we offer you specific discount codes, which you will not be able to find anywhere else. This allows us to beat all competitor prices and provide you with the cheapest, most trustworthy deals. If the current cheapest price of $17.15 for State of Decay 2 is too high, create a price alert and we will alert you through email, SMS, or discord the moment the State of Decay 2 price matches your budget.

Can I play State of Decay 2 immediately after the purchase?

What store should I choose for the best State of Decay 2 Deal?