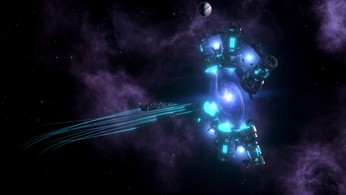 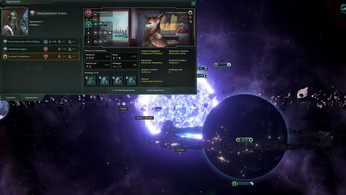 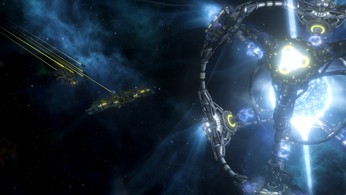 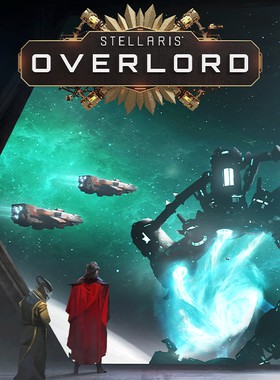 Overlord, a new full expansion for Stellaris, grants access to new features designed to unlock the next level of your empire. Guide a galaxy full of potential subjects to glory - or subjugation. New mechanics provide many ways to specialize your vassals' roles within your empire, bring new planets and subjects under your reign, and new magnificent megastructures to project your power further, faster.

Whether you're ruling the galaxy from the bridge of your flagship or from the opulent capital of your magnificent homeworld, Overlord will grant you the following perks of leadership:· New vassalization mechanics let you define the role of your new subjects - create new Specialist Empires to grow into economic superpowers, military specialists, and technological creators. Negotiate or demand contracts and agreements between your vassals to define the future of dozens of worlds, and reap the benefits!

· Seek out and unite scattered empires across the stars! As you explore the vast galaxy you'll encounter more unique enclaves of people, from mysterious shroudwalkers to militaristic mercenaries and crafty salvagers. Will you forge a mutually beneficial relationship and earn their unique services, or will they submit to your rule by force? · Imperial Fiefdom - You may be just a Specialist Empire now, but some day, the galaxy may need a new ruler… shouldn't it be you?

· Slingshot to the Stars - The ruined remains of a Quantum Catapult have been discovered near your homeworld - what secrets might it unlock if your people are clever enough to bring it back online?

· Subterranean - Your species adapted to life underground, excelling in mining and archaeology. See what awaits you far, far above the surface!

· Teachers of the Shroud - Developing in contact with the curious psions known as the Shroudwalkers, your empire has learned a thing or two about expanding their minds!

· Progenitor Hive - Under your leadership, this hivemind empire can achieve more than ever before… but without your guidance, the hive will fall to ruin!

· New feats of technology will give your empire the edge it needs to become the dominant force across the galaxy.

· Orbital Rings will elevate your influence (and defense) in grand displays of power from your planets further into space.

· Hyper Relays will give your fleets the ability to enforce your will across the stars faster than ever before.

· Quantum Catapults enable new ways to react quicker in the galaxy while projecting your might - but it's a daring one-way trip for your fleet!

· Four new music tracks to inspire your rise to greatness

Where can I buy a Stellaris: Overlord Key?

With GameGator, you are able to compare 18 deals across verified and trusted stores to find the cheapest Stellaris: Overlord Key for a fair price. All stores currently listed have to undergo very specific testing to ensure that customer support, game deliveries, and the game keys themselves are of the highest quality. To sweeten the deal, we offer you specific discount codes, which you will not be able to find anywhere else. This allows us to beat all competitor prices and provide you with the cheapest, most trustworthy deals. If the current cheapest price of $10.48 for Stellaris: Overlord is too high, create a price alert and we will alert you through email, SMS, or discord the moment the Stellaris: Overlord price matches your budget.

Can I play Stellaris: Overlord immediately after the purchase?

What store should I choose for the best Stellaris: Overlord Deal?