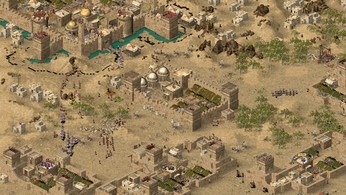 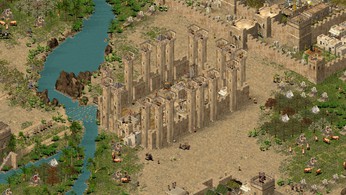 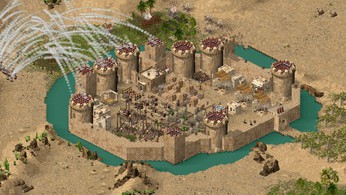 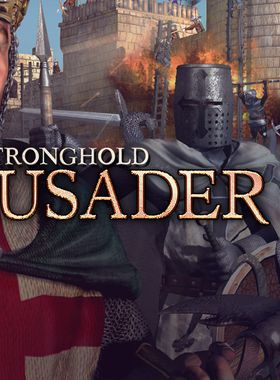 In 2001, the game "Stronghold" appeared on the horizon of real-time strategy games. The game focuses on building and conquering castles. Both economic and military aspects played a role. The player had to provide the subjects with food, keep them happy, and recruit military troops. Besides, the construction of defensive structures and heavy siege equipment played an important role. "Stronghold Crusader HD" is the successor of "Stronghold Crusader" released in 2002 and uses mostly the same two-dimensional graphics. The game principle is also the same: The player has the task to gain resources and use them to build his fortress and to recruit military troops. The latter can take on incredible proportions. Up to 10000 units are possible. The goal of the game is to defeat the opposing parties. "Stronghold Crusader HD" is a real-time strategy game aimed at experienced strategists who have already successfully played the predecessors of Stronghold games and do not have high demands on the game graphics. For teenagers to whom this does not apply, "Stronghold Crusader Extreme" does not seem suitable to us. The young testers in our group were overstrained with this strategy game and resigned already during the first mission.

Where can I buy a Stronghold Crusader HD Key?

With GameGator, you are able to compare 18 deals across verified and trusted stores to find the cheapest Stronghold Crusader HD Key for a fair price. All stores currently listed have to undergo very specific testing to ensure that customer support, game deliveries, and the game keys themselves are of the highest quality. To sweeten the deal, we offer you specific discount codes, which you will not be able to find anywhere else. This allows us to beat all competitor prices and provide you with the cheapest, most trustworthy deals. If the current cheapest price of $2.04 for Stronghold Crusader HD is too high, create a price alert and we will alert you through email, SMS, or discord the moment the Stronghold Crusader HD price matches your budget.

Can I play Stronghold Crusader HD immediately after the purchase?

What store should I choose for the best Stronghold Crusader HD Deal?