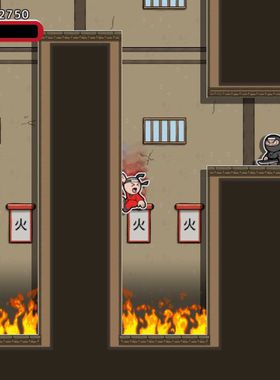 Get ready to tune up your coffee-ninja skills, you will need them in this hardcore platformer!

Super Hyperactive Ninja is a fast-paced hyper-caffeinated action-platformer in 2D, designed with those who want a real tough challenge and speedrunners in mind.

The evil Shogun has stolen all the coffee from the secret ninja village of Kohinomura, recover it before you fall asleep!

You will play as Kohimaru, the last of the Coffee-Nin, to defeat the Shoguns army of evil ninjas and samurai, and his great yokai generals.

Save your fellows and recover the Legendary Coffee, which its said to grant infinite energy to the one who takes it whole without milk.

Your energy is limited, and must be recharged with the coffees you find in the levels. If you run out of caffeine, its GAME OVER!

Race against your cruelest enemy: SLUMBER!

Where can I buy a Super Hyperactive Ninja Key?

With GameGator, you are able to compare 3 deals across verified and trusted stores to find the cheapest Super Hyperactive Ninja Key for a fair price. All stores currently listed have to undergo very specific testing to ensure that customer support, game deliveries, and the game keys themselves are of the highest quality. To sweeten the deal, we offer you specific discount codes, which you will not be able to find anywhere else. This allows us to beat all competitor prices and provide you with the cheapest, most trustworthy deals. If the current cheapest price of $4.89 for Super Hyperactive Ninja is too high, create a price alert and we will alert you through email, SMS, or discord the moment the Super Hyperactive Ninja price matches your budget.

Can I play Super Hyperactive Ninja immediately after the purchase?

What store should I choose for the best Super Hyperactive Ninja Deal?