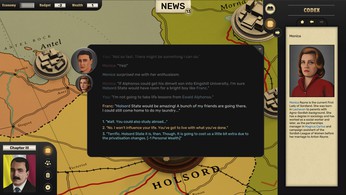 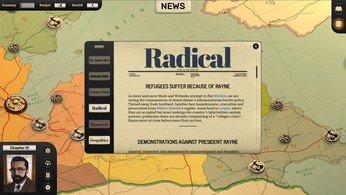 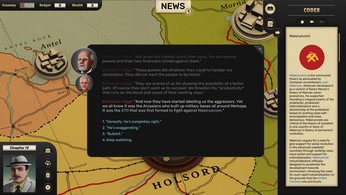 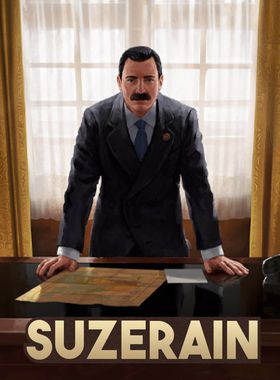 As President Anton Rayne, lead Sordland into ruin or repair in your first term. Navigate a political drama, driven by conversations with your cabinet members and other significant figures in a country with its own complicated history. Beware or embrace corruption; shirk or uphold ideals. In 1954, the country of Sordland is emerging from a 20-year dictatorship, following a bloody civil war. You play as a charismatic young man, Anton Rayne, who has surprised everyone by rising to the top of the party in power and getting elected as the new President of Sordland.

The people are hungry for democratic reforms after decades under a traditionalist power. The economy is in shambles and the political landscape is shifting. Neighboring superpowers are watching closely, and there are military threats on the horizon. Can you pull the country out of its recession? Will you meet the demands of your people for reform? The future of Sordland depends on your choices. Good luck, Mr. President.

Work closely with your Cabinet members to forge strong policies and practices for your government. Make deals and allies to benefit the people—or yourself. But remember: everyone has their own ideals, and agenda. Pick your allies carefully, and your enemies even more carefully. Which is more important, your country or your family? It's challenging to be a good father and a good president at the same time. Can you do both? If not, which one will you choose?

Where can I buy a Suzerain Key?

With GameGator, you are able to compare 24 deals across verified and trusted stores to find the cheapest Suzerain Key for a fair price. All stores currently listed have to undergo very specific testing to ensure that customer support, game deliveries, and the game keys themselves are of the highest quality. To sweeten the deal, we offer you specific discount codes, which you will not be able to find anywhere else. This allows us to beat all competitor prices and provide you with the cheapest, most trustworthy deals. If the current cheapest price of $0.47 for Suzerain is too high, create a price alert and we will alert you through email, SMS, or discord the moment the Suzerain price matches your budget.

Can I play Suzerain immediately after the purchase?

What store should I choose for the best Suzerain Deal?

There are many details that you might want to go through before settling on the deal of your choosing. If you are looking for a special Edition, such as Presidential Edition, you can select these in our menu. When it comes to the actual stores, we made sure that you will never get overcharged/neglected. As we care about your satisfaction, we like to ensure that all deals are legitimate, reliable, and foolproof. On top of that, we make sure all stores affiliated with us have proper refund processes and guarantees and are backed by a competent team to ensure that absolutely nothing will go wrong.