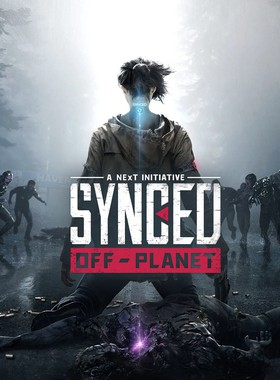 SYNCED: Off-Planet is a companion shooter set in a techno-apocalyptic future. Fight together against enemy teams and synchronize with Nano companion classes to deploy in combat. Strengthen your squad, upgrade your weapons and uncover how society's greatest innovation went wrong.

Bring something new to the fight with Nano companions. Synchronize the Nanos you defeat to control companion classes with different abilities and customizable modifiers to outsmart and outlast the competition.

Team up in squads of three for fast-paced action across multiple game modes where you'll need more than just shooting to survive. Use your environment, teammates and Nanos to deploy unique tactical combinations against roaming hoards and enemy teams.

Discover and develop your Haven between matches. Make upgrades to weapons and gear to improve your survival skills and save other survivors to expand your skill set for your next battle.

Immerse yourself in a story that grows with you. Progress through matches to meet more survivors and reveal new information. Unravel the wires that bind techno-optimism and corruption to the downfall of society as we know it.

Where can I buy a Synced: Off-Planet Key?

With GameGator, you are able to compare deals across verified and trusted stores to find the cheapest Synced: Off-Planet Key for a fair price. All stores currently listed have to undergo very specific testing to ensure that customer support, game deliveries, and the game keys themselves are of the highest quality. To sweeten the deal, we offer you specific discount codes, which you will not be able to find anywhere else. This allows us to beat all competitor prices and provide you with the cheapest, most trustworthy deals. If the current cheapest price for Synced: Off-Planet is too high, create a price alert and we will alert you through email, SMS, or discord the moment the Synced: Off-Planet price matches your budget.

Can I play Synced: Off-Planet immediately after the purchase?

What store should I choose for the best Synced: Off-Planet Deal?