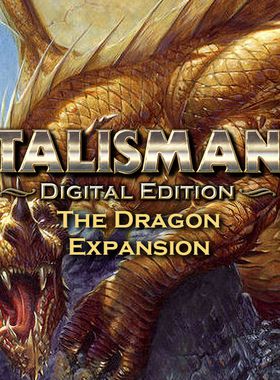 About Talisman - The Dragon

The Dragon Expansion introduces a whole host of new mechanics including two new Inner Regions. Get ready for your Talisman experience to be taken to a whole new level as you prepare yourself to battle the Dragon Lords.

The Dragon Realm has a similar set up to the normal board but boasts a number of difficult challenges as the number of dragon scales increase. Within the Dragon Realm you do not roll the die, instead you move one space at a time, following the directions the board gives until you confront the Dragon King.

The Dragon Tower has a single path that leads to the Crown of Command, in which characters move along the spiralling staircase by drawing cards from the Dragon King's Deck. When moving through the Dragon Tower you do not roll the die, instead you move one space per turn plus an additional space for each Enemy you kill.

These Inner Regions are not for the faint hearted as you must encounter almost every space. Make sure you're prepared before crossing through the Portal of Power.

Where can I buy a Talisman - The Dragon Key?

With GameGator, you are able to compare deals across verified and trusted stores to find the cheapest Talisman - The Dragon Key for a fair price. All stores currently listed have to undergo very specific testing to ensure that customer support, game deliveries, and the game keys themselves are of the highest quality. To sweeten the deal, we offer you specific discount codes, which you will not be able to find anywhere else. This allows us to beat all competitor prices and provide you with the cheapest, most trustworthy deals. If the current cheapest price for Talisman - The Dragon is too high, create a price alert and we will alert you through email, SMS, or discord the moment the Talisman - The Dragon price matches your budget.

Can I play Talisman - The Dragon immediately after the purchase?

What store should I choose for the best Talisman - The Dragon Deal?