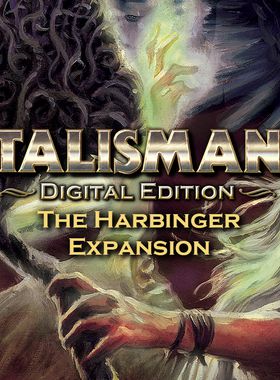 About Talisman - The Harbinger

Dark omens herald the end of all things. Fire rains from the sky, the sea swallows the land, demons stalk the world and the dead rise from their graves. In the midst of these dark times, great heroes are needed to face these new threats and save the world of Talisman from utter annihilation.

The end is nigh and it's down to you to save the world of Talisman. Discover the Omens that are lingering over the land and win before the horrible future they predict comes true. Are you prepared to save the land? The Harbinger is a mysterious figure that bears an ancient prophecy that foretells the end of the world. At the start of the game, The Harbinger is placed off the board until a player (not in the Inner Region) draws an Event Card.

Where can I buy a Talisman - The Harbinger Key?

With GameGator, you are able to compare deals across verified and trusted stores to find the cheapest Talisman - The Harbinger Key for a fair price. All stores currently listed have to undergo very specific testing to ensure that customer support, game deliveries, and the game keys themselves are of the highest quality. To sweeten the deal, we offer you specific discount codes, which you will not be able to find anywhere else. This allows us to beat all competitor prices and provide you with the cheapest, most trustworthy deals. If the current cheapest price for Talisman - The Harbinger is too high, create a price alert and we will alert you through email, SMS, or discord the moment the Talisman - The Harbinger price matches your budget.

Can I play Talisman - The Harbinger immediately after the purchase?

What store should I choose for the best Talisman - The Harbinger Deal?