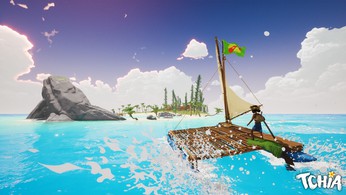 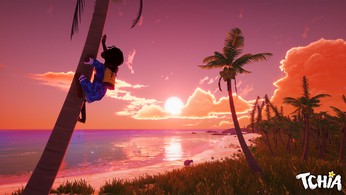 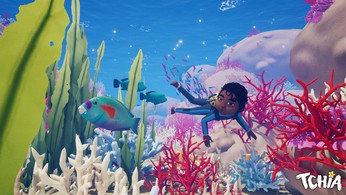 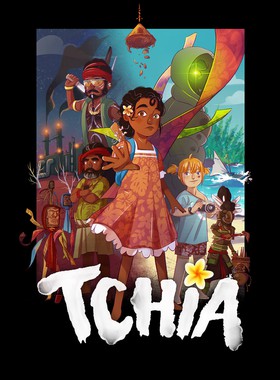 Tchia's special gift lets you take control of any animal or object you can find. Use their unique gameplays and abilities to travel, solve puzzles and uncover secrets. Fly around as a bird, explore the ocean as a fish or dig treasures as a dog. Over 30 playable animals and hundreds of objects. Jump and glide your way across a vast archipelago and use the Tricks system for cool stunts and dives. The free climbing mechanic lets you ascend anything in the world without restriction including any physics-driven tree. Sail your customizable boat on turquoise lagoons and dive around coral reefs and shipwrecks.

Just jamming by yourself or playing alongside NPCs, your fully playable ukulele will be a trusty companion throughout the game. Use it at key story moments during rhythm sections, or play unlockable melodies at any point in the open world to trigger special events such as attracting animals, triggering rainfall… Take Tchia on a heartfelt adventure and meet a diverse cast of characters inspired by New Caledonian cultures. Fully animated cutscenes voiced in traditional language will punctuate your journey while an original orchestral score infused with local sounds creates a unique and immersive world.

Stylize Tchia's clothing and boat with hundreds of unlockable cosmetic items ranging from a traditional look to the most over the top options. You will also unlock useful and fun tools along the way such as a flashlight, slingshot, compass, camera... The world of Tchia was inspired by New Caledonia, A tiny island in the Pacific Ocean, homeland of Awaceb's co-founders. Inspiration was taken from the rich and varied local landscapes, cultures, music, languages, folklores and traditions and was used to create a fictional world and to tell a universal story that anyone can understand and enjoy. The characters are voiced by local talent in traditional languages, and subtitled in many languages including English, French, Russian, Chinese, German, and more.

Where can I buy a Tchia Key?

With GameGator, you are able to compare deals across verified and trusted stores to find the cheapest Tchia Key for a fair price. All stores currently listed have to undergo very specific testing to ensure that customer support, game deliveries, and the game keys themselves are of the highest quality. To sweeten the deal, we offer you specific discount codes, which you will not be able to find anywhere else. This allows us to beat all competitor prices and provide you with the cheapest, most trustworthy deals. If the current cheapest price of $99.99 for Tchia is too high, create a price alert and we will alert you through email, SMS, or discord the moment the Tchia price matches your budget.

Can I play Tchia immediately after the purchase?

What store should I choose for the best Tchia Deal?