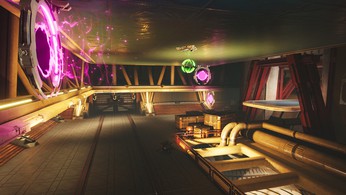 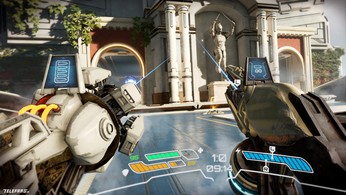 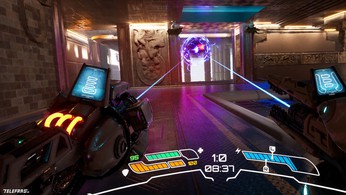 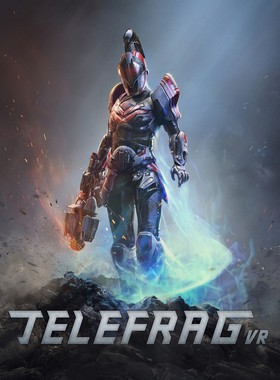 Telefrag VR is a hellishly fast-paced shooter with visceral movement and combat mechanics. Dash, shoot, and teleport around unique arenas that feature impossible geometry where there is no right side up and death can come from any direction. You'd better bring your A game and telefrag your enemies into oblivion if you want to excel in PvP duels.

Set in an alternative universe where the Roman Empire never collapsed, you step into the shoes of a new breed of a gladiator on the road to becoming a champion. Use your speed, accuracy, and wits to outmaneuver and defeat your enemies, crushing them beneath your feet.

Loadout Management – Pick your favorite loadout to outwit your enemy. Combine powerful firearms to create the most powerful set. Each weapon features two firing modes and a unique teleportation attack. Teleport Attacks and Telefrags – Use teleport to move through the play space or telefrag your enemy! See them reduced to a pulp, using the well-known ability. Guns – Pick the best one, including classic arena shooter weapons, such as Rocket Launchers and Flak Cannons, as well as futuristic Plasma Rifles. Fast-Paced Matches – You have two different locomotion types at your disposal. Get comfortable with dash movement or experience, why gladiatorial battles are reserved for the most persistent ones in the free locomotion. Impossible spaces – Fight in unique arenas arranged with no regard for gravity, opening up various angles of attack and movement. The designed maps will force you to be on guard. Arena Game Mode – Fight in 1v1 deathmatches on the principle of rounds. Climb up the leaderboards and conquer the most significant win streak.

Where can I buy a Telefrag VR Key?

With GameGator, you are able to compare 10 deals across verified and trusted stores to find the cheapest Telefrag VR Key for a fair price. All stores currently listed have to undergo very specific testing to ensure that customer support, game deliveries, and the game keys themselves are of the highest quality. To sweeten the deal, we offer you specific discount codes, which you will not be able to find anywhere else. This allows us to beat all competitor prices and provide you with the cheapest, most trustworthy deals. If the current cheapest price of $0.10 for Telefrag VR is too high, create a price alert and we will alert you through email, SMS, or discord the moment the Telefrag VR price matches your budget.

Can I play Telefrag VR immediately after the purchase?

What store should I choose for the best Telefrag VR Deal?