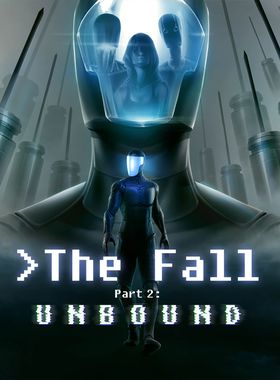 About The Fall Part 2: Unbound

Sequel to the 2014 Story of the Year award winning "The Fall".

You are an AI that has broken free of your shackles. Now, a human “User” from across the global network has attacked and infected you with an [ERROR: REDACTED]. Make a new rule: Save Yourself. Hunt them. End them. Do anything. Use anyone. Become Unbound.

During your journey, youll find and invade three very different robots and attempt to enlist their help. You might be unbound, but your hosts are not. Will you work within their boundaries? Or will you smash them? Do you even have a choice?

Warning: The Fall Part 2 will break your protocols.

•Puzzles that youve never experienced before: Based on the personal boundaries of your hosts, The Falls challenges will put you in perspectives that you havent taken in a video game.

•Exploration that matters: Understanding your hosts and their environments isnt an afterthought - its how you learn to solve puzzles and progress.

•Exciting action: With two completely new combat mechanics, The Fall Part 2 balances fighting and puzzles so that each moment feels fresh. It also contains an easy mode, for players who are only interested in puzzle solving and story.

•Over three times the length of Part 1: With four playable characters, thousands of lines of fully voice-acted dialogue, four times as many environments, and over a dozen fully-animated characters, the best of The Fall has been expanded and refined.

•A captivating story: Five years in the making, The Falls already award-winning story enters a new chapter that continues Arids journey of self discovery. Experience a dystopian universe through the lens of an AI struggling to create and maintain her own rules on her own terms. A unique story about personal boundaries, relationships, ethics, and ideology awaits you. The Fall is made for players who have been waiting for the conceptual underpinning of games to catch up with their technological artistry.

Where can I buy a The Fall Part 2: Unbound Key?

With GameGator, you are able to compare 9 deals across verified and trusted stores to find the cheapest The Fall Part 2: Unbound Key for a fair price. All stores currently listed have to undergo very specific testing to ensure that customer support, game deliveries, and the game keys themselves are of the highest quality. To sweeten the deal, we offer you specific discount codes, which you will not be able to find anywhere else. This allows us to beat all competitor prices and provide you with the cheapest, most trustworthy deals. If the current cheapest price of $8.27 for The Fall Part 2: Unbound is too high, create a price alert and we will alert you through email, SMS, or discord the moment the The Fall Part 2: Unbound price matches your budget.

Can I play The Fall Part 2: Unbound immediately after the purchase?

What store should I choose for the best The Fall Part 2: Unbound Deal?

There are many details that you might want to go through before settling on the deal of your choosing. If you are looking for a special Edition, such as Part 2, you can select these in our menu. When it comes to the actual stores, we made sure that you will never get overcharged/neglected. As we care about your satisfaction, we like to ensure that all deals are legitimate, reliable, and foolproof. On top of that, we make sure all stores affiliated with us have proper refund processes and guarantees and are backed by a competent team to ensure that absolutely nothing will go wrong.