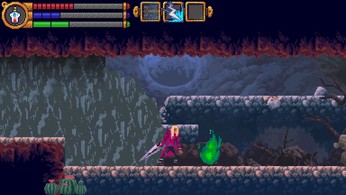 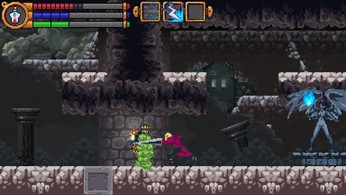 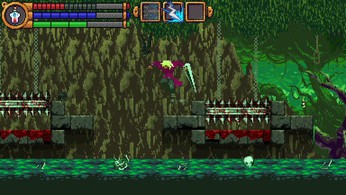 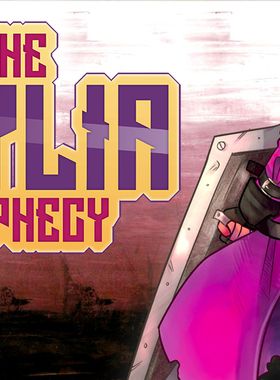 Mirenia is an 18 year old girl on a quest for redemption. After unleashing an evil power when she was a teenager, she is now on her way to Tirkin Fortress to perform an ancient spell that should help her vanquish the very evil she unleashed three years ago. Now, nearing the end of her quest, she arrives in the villages just outside the fortress, where monsters ravage, young women are being raped and men are being slaughtered. Armed with her trusted Shield Blade, Mirenia is so close of undoing the mistakes of her past. Will she succeed or ultimately only make matters worse?

The Skylia Prophecy is a sidescrolling action-rpg set in a medieval fantasy world. As Mirenia, you will journey throughout the lands and towns, explore ancient dungeons and battle hordes of the undead in this hard as hell adventure inspired by the 'kill the player' philosophy of the 'Souls' games. Along your way you will meet the people of these lands, who will ask you to help them, sell you powerful items and reveal secrets to aid you on your journey. By interacting with the townsfolk, you will ultimately recieve rewards that make the game easier in the long run - thus, you set the difficulty for the final strech yourself! Will you find redemption or ultimately end up among the dead?

Where can I buy a The Skylia Prophecy Key?

With GameGator, you are able to compare 8 deals across verified and trusted stores to find the cheapest The Skylia Prophecy Key for a fair price. All stores currently listed have to undergo very specific testing to ensure that customer support, game deliveries, and the game keys themselves are of the highest quality. To sweeten the deal, we offer you specific discount codes, which you will not be able to find anywhere else. This allows us to beat all competitor prices and provide you with the cheapest, most trustworthy deals. If the current cheapest price of $5.98 for The Skylia Prophecy is too high, create a price alert and we will alert you through email, SMS, or discord the moment the The Skylia Prophecy price matches your budget.

Can I play The Skylia Prophecy immediately after the purchase?

What store should I choose for the best The Skylia Prophecy Deal?