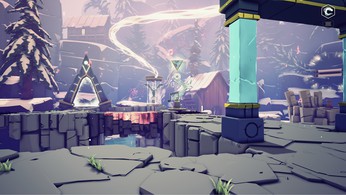 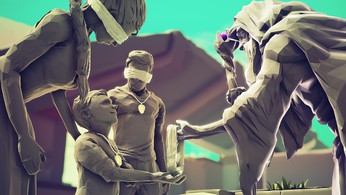 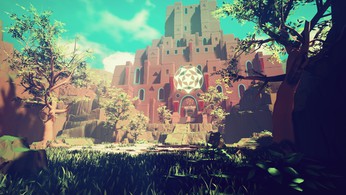 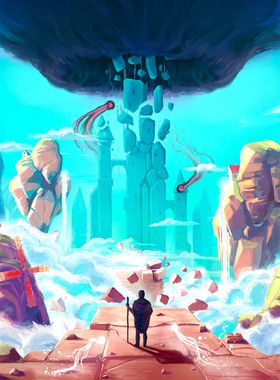 The story of The Sojourn is told rather passively. As the game shows you its environments and statues in different situations, you only receive information from text inserts or documents that you acquire after solving puzzles. The themes The Sojourn deals with are directly taken from life and are about growing up and learning. The story thus becomes accessible to everyone and offers enough space for their own interpretations. The gameplay is as relaxed as the narrative of the story. You steer the mute main character through the levels from an ego perspective and solve puzzles. It's often about the game between light and shadow. Step into portals and darkness rays again and again to get into the shadow world. The world then changes from light to dark, opening up areas that were previously inaccessible. This creates bridges over abysses but also obstacles that you can only cross in the light. In addition, statues are activated in the shadow world, which you have to use in every puzzle. The game offers relaxed puzzle fun in a picturesque world. The slow speed and the calm sounds immediately draw you into the world and create an interesting atmosphere. Even if the story is told passively, the depicts scenes are always interesting to watch.

Where can I buy a The Sojourn Key?

With GameGator, you are able to compare 20 deals across verified and trusted stores to find the cheapest The Sojourn Key for a fair price. All stores currently listed have to undergo very specific testing to ensure that customer support, game deliveries, and the game keys themselves are of the highest quality. To sweeten the deal, we offer you specific discount codes, which you will not be able to find anywhere else. This allows us to beat all competitor prices and provide you with the cheapest, most trustworthy deals. If the current cheapest price of $2.06 for The Sojourn is too high, create a price alert and we will alert you through email, SMS, or discord the moment the The Sojourn price matches your budget.

Can I play The Sojourn immediately after the purchase?

What store should I choose for the best The Sojourn Deal?