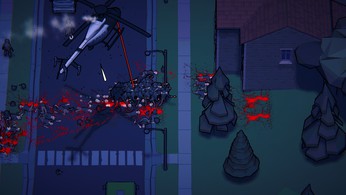 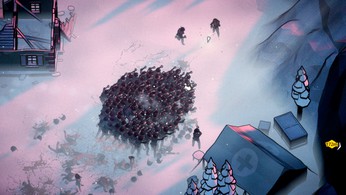 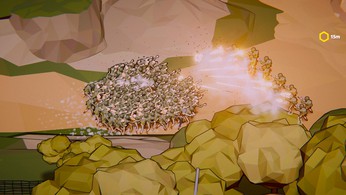 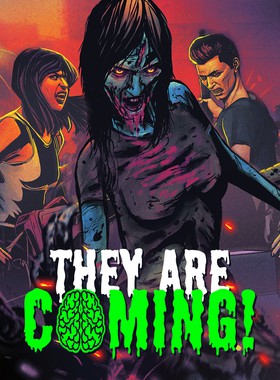 About They Are Coming!

Ardennes, 1944. What the Americans call The Battle of the Bulge slowly peters out, as Nazi tanks run out of gas and are mercilessly pounded into the ground by Allied air force. Defeat prompts the Reich to unleash its Wunderwaffe in a desperate bid to turn the tide of the battle: Hungry, hungry zombies.

Or, well, a zombie. It's up to you to gnaw and bite your way to victory, through allies, Nazis, and everyone else you meet. Once you're done with that, spread the joy of undeath and liking for the delicate taste of brain beyond Ardennes (or World War II for that matter).

Who knows what delicious humans you'll find in the modern times? Or even the future?

Zombies exist for one thing, and one thing only: Gnawing on humans. Or rather, their brains. Take one zombie, then "recruit" an entire horde to them to take on the world.

Some humans won't become the main course quietly! Dodge machine guns, mortars, tank shells, and everything else humanity puts in the way of a hard-munchin' zombie to keep 'em away from delicious gray matter.

Every stage is filled with humans to meet and bite on. Every stage also has plenty of secrets and challenges to uncover, together with the friends you eat on the way. Can you find them all?

Everything you do adds up to the final score and evolution of the horde. How good are *youat devouring your way to the end of humanity?

Where can I buy a They Are Coming! Key?

With GameGator, you are able to compare 5 deals across verified and trusted stores to find the cheapest They Are Coming! Key for a fair price. All stores currently listed have to undergo very specific testing to ensure that customer support, game deliveries, and the game keys themselves are of the highest quality. To sweeten the deal, we offer you specific discount codes, which you will not be able to find anywhere else. This allows us to beat all competitor prices and provide you with the cheapest, most trustworthy deals. If the current cheapest price of $3.56 for They Are Coming! is too high, create a price alert and we will alert you through email, SMS, or discord the moment the They Are Coming! price matches your budget.

Can I play They Are Coming! immediately after the purchase?

What store should I choose for the best They Are Coming! Deal?