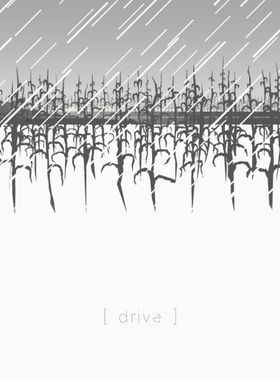 In her mid-20s, Kelly has been forced to move back to Nebraska. Back to that flat expanse, that seemingly endless sea of rustling cornstalks peppered by rusty silos and rustier towns. A typically intense Midwestern storm is approaching while Kelly is out; she has to get home. In the 20 miles between her grandparents crumbling barn and her parents house, she receives a phone call from her mother.

Assume the role of Kelly during her drive through the storm in Three Fourths Home: Extended Edition. While driving through a stylized representation of rural Nebraska, players navigate an extended conversation between Kelly and her parents and younger brother. Through dialogue choice and simple driving mechanics, this critically-acclaimed visual short story explores a specific moment of these characters lives and their relationships with one another.

The Extended Edition of Three Fourths Home includes an epilogue that expands on the story of the main game. Set at a bus stop in snowy Minnesota, this epilogue examines Kellys past as well as the effects that the events of the main story have had on her.

Where can I buy a Three Fourths Home Key?

With GameGator, you are able to compare 9 deals across verified and trusted stores to find the cheapest Three Fourths Home Key for a fair price. All stores currently listed have to undergo very specific testing to ensure that customer support, game deliveries, and the game keys themselves are of the highest quality. To sweeten the deal, we offer you specific discount codes, which you will not be able to find anywhere else. This allows us to beat all competitor prices and provide you with the cheapest, most trustworthy deals. If the current cheapest price of $0.83 for Three Fourths Home is too high, create a price alert and we will alert you through email, SMS, or discord the moment the Three Fourths Home price matches your budget.

Can I play Three Fourths Home immediately after the purchase?

What store should I choose for the best Three Fourths Home Deal?

There are many details that you might want to go through before settling on the deal of your choosing. If you are looking for a special Edition, such as Extended Edition or Extended Edition Deluxe, you can select these in our menu. When it comes to the actual stores, we made sure that you will never get overcharged/neglected. As we care about your satisfaction, we like to ensure that all deals are legitimate, reliable, and foolproof. On top of that, we make sure all stores affiliated with us have proper refund processes and guarantees and are backed by a competent team to ensure that absolutely nothing will go wrong.