Through the Darkest of Times 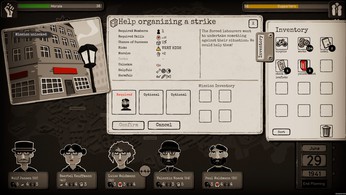 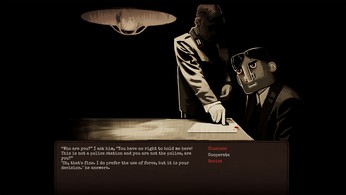 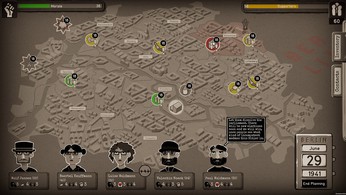 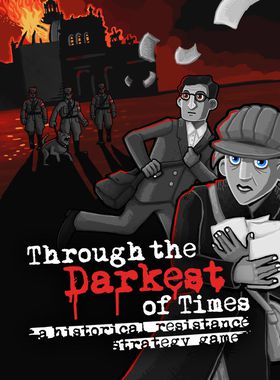 Through the Darkest of Times

About Through the Darkest of Times

Dark times mean fear and risks. The risk to be caught by patrolling National Socialists, looking for people who publicly stand against their point of view. The risk of being beaten up or even killed by the German military because we‘re opposing the regime. The risk of losing everything, including our loved ones. This is how we live. This is how we try to survive. Through the darkest of times.

You are the leader of a small resistance group in 1933's Berlin, of ordinary people, from Jews to Catholics and Communists to Patriots who simply can't stand aside. Your goal is to deal with small blows to the regime – dropping leaflets to spread awareness about what the Nazis are really up to among the people, painting messages on walls, sabotaging, gathering information and recruiting more followers. And all of that while staying undercover – if the regime's forces learn about your group, the life of each member is in grave danger.

Through the Darkest of Times is a historical resistance strategy game, focusing on conveying the somber mood of the period and the very real struggles of average people living in the 3rd Reich. Historical accuracy means that your small group of resistance fighters will not change the outcome of the war, nor will you prevent all of the Nazi's atrocities, but you can certainly do everything in your power to save as many lives as you can and oppose the fascist system wherever possible.

Where can I buy a Through the Darkest of Times Key?

With GameGator, you are able to compare 28 deals across verified and trusted stores to find the cheapest Through the Darkest of Times Key for a fair price. All stores currently listed have to undergo very specific testing to ensure that customer support, game deliveries, and the game keys themselves are of the highest quality. To sweeten the deal, we offer you specific discount codes, which you will not be able to find anywhere else. This allows us to beat all competitor prices and provide you with the cheapest, most trustworthy deals. If the current cheapest price of $0.77 for Through the Darkest of Times is too high, create a price alert and we will alert you through email, SMS, or discord the moment the Through the Darkest of Times price matches your budget.

Can I play Through the Darkest of Times immediately after the purchase?

What store should I choose for the best Through the Darkest of Times Deal?