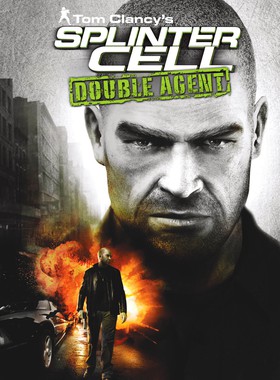 The best-selling Tom Clancy's Splinter Cell saga takes on an entirely new direction. In the highly anticipated sequel to the 2005 game of the year, Tom Clancy's Splinter Cell Double Agent, play as a double agent spy for the first time ever. Take on dual roles of covert operative and ruthless terrorist, where your choices of whom to betray and whom to protect actually affect the outcome of your game.

Experience the relentless tension and gut-wrenching dilemmas of life as a double agent. Lie. Kill. Sabotage. Betray. All to protect the innocent. How far will you go to gain the enemy's trust? As covert operative Sam Fisher, you must infiltrate a vicious terrorist group and destroy it from within. You'll need to carefully weigh the consequences of your actions. Kill too many terrorists and you'll blow your cover. Hesitate and millions will die. Do whatever it takes to complete your mission, but get out alive.

Double agent gameplay and branching storyline - Play both sides and decide between opposing NSA and terrorists objectives. You choose who's priorities to support, and who's to undermine. Your actions affect the story and gameplay, leading to shockingly different endings.

Upgradeable weapons and gadgets - As you progress get access to upgraded prototype gadgets and weapons, like improved night vision, based on your choices and covert skills.

Authentic double agent tactics - Use realistic tactics, based on testimonies of actual undercover agents, to sabotage the enemies' plans.

Where can I buy a Tom Clancy's Splinter Cell Double Agent Key?

With GameGator, you are able to compare 13 deals across verified and trusted stores to find the cheapest Tom Clancy's Splinter Cell Double Agent Key for a fair price. All stores currently listed have to undergo very specific testing to ensure that customer support, game deliveries, and the game keys themselves are of the highest quality. To sweeten the deal, we offer you specific discount codes, which you will not be able to find anywhere else. This allows us to beat all competitor prices and provide you with the cheapest, most trustworthy deals. If the current cheapest price of $1.89 for Tom Clancy's Splinter Cell Double Agent is too high, create a price alert and we will alert you through email, SMS, or discord the moment the Tom Clancy's Splinter Cell Double Agent price matches your budget.

Can I play Tom Clancy's Splinter Cell Double Agent immediately after the purchase?

What store should I choose for the best Tom Clancy's Splinter Cell Double Agent Deal?