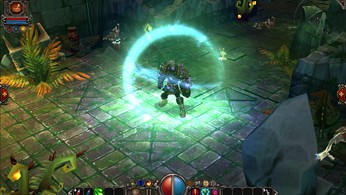 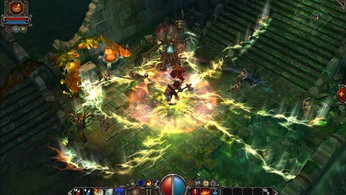 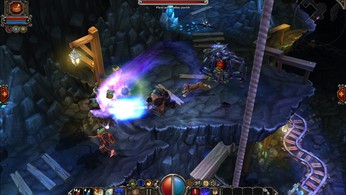 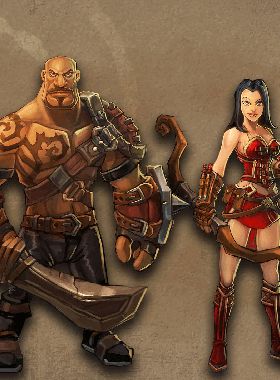 At the end of last year, the Steam version of the action roleplaying game Torchlight from the young developer studio Runic Games was tested. Now Jowood has put a German boxed version of the now award-winning title in the shop. Reason enough to retake a look at Torchlight. The game itself has not changed. You still choose one of three characters - typically a sexy archer, a magically gifted alchemist, and/or a fat warrior. After the selection, you will land in the fantasy village Torchlight. The town attracts adventurers because the mines below it mine precious hat stones. The only problem is that the ore corrupts creatures in its vicinity. To descend into the comic-strip-like, various galleries to find out what this source of evil is all about. An epic story or great quests won't be waiting for you. When it comes to the gameplay, however, you'll notice that many of the Runic staff had previously worked for Blizzard on the Diablo series. Every second you click monsters dead, cast spells, and collect magical items. The types of enemies differ significantly from one another. From the giant spider to the speared gnome, you'll find everything. In between, the game with fat boss enemies throws harder nuts at you. In short: Torchlight is the essence of a role-playing action game. Condensed and improved for the fastest, most uncomplicated game fun possible.

Where can I buy a Torchlight Key?

With GameGator, you are able to compare 20 deals across verified and trusted stores to find the cheapest Torchlight Key for a fair price. All stores currently listed have to undergo very specific testing to ensure that customer support, game deliveries, and the game keys themselves are of the highest quality. To sweeten the deal, we offer you specific discount codes, which you will not be able to find anywhere else. This allows us to beat all competitor prices and provide you with the cheapest, most trustworthy deals. If the current cheapest price of $0.84 for Torchlight is too high, create a price alert and we will alert you through email, SMS, or discord the moment the Torchlight price matches your budget.

Can I play Torchlight immediately after the purchase?

What store should I choose for the best Torchlight Deal?