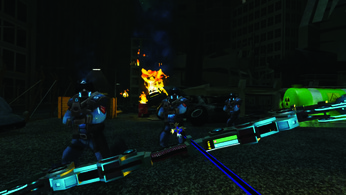 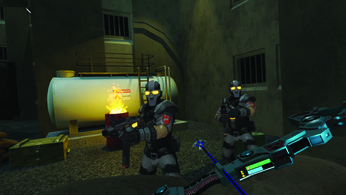 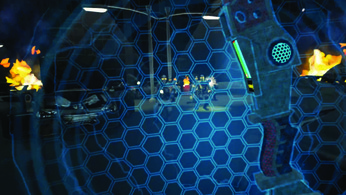 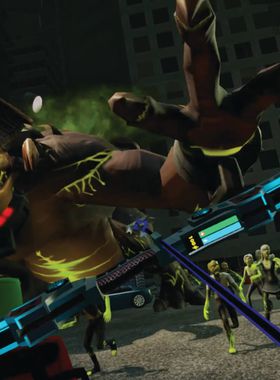 Twisted Arrow is a full-tilt, no-holds-barred VR-FPS that gives players an adrenaline-packed arcade style game play. Experience urban warfare as never before by immersing yourself in this frenzied fight for survival. THIS IS NOT A WAVE SHOOTER, but a FPS that lets you traverse through a vast city, up and down tall buildings, and position yourself in strategic areas to make the perfect head shot or using an explosive arrow to launch NPC units 200ft in the air in a fiery ball of fatality!

Outmanned and outgunned, you are the last line of defense against a high-tech, paramilitary force occupying your city. But don't feel sorry for yourself, feel sorry for the poor bastard that gets in your way! Armed with the Manticore, the military's top secret combat bow, and an arsenal of over powered arrows, you will need to fight your way through an enemy armed with high-tech weaponry, armored mechs, attack drones, and a host of biological secrets yet to be uncovered in the remnants of a city on the brink of ruin. Your mission is simple: recon the city, rescue hostages, and get the hell out of dodge while eliminating any and all resistance with extreme prejudice. If it moves, kill it! If it doesn't move, it's probably already dead.

Movement: The game was build from the start for fast paced arcade action. Think of the classic arcade game Time Crisis. Its not about discovery or exploration but mayhem and destruction! Designed with predefined teleport areas, allowing you to quickly pick the right path through the city, focusing more on the action then worrying about movement. Yes, it uses teleport locomotion because you have a teleporter! So SHOOT SOMETHING ALREADY!

Ok its time to Nock and Load and let it rain pain! Unleash maximum mayhem and take your pent-up, inner beast out for a joy ride. Don't forget to stretch, because you're going to feel this in the morning.

Where can I buy a Twisted Arrow Key?

With GameGator, you are able to compare deals across verified and trusted stores to find the cheapest Twisted Arrow Key for a fair price. All stores currently listed have to undergo very specific testing to ensure that customer support, game deliveries, and the game keys themselves are of the highest quality. To sweeten the deal, we offer you specific discount codes, which you will not be able to find anywhere else. This allows us to beat all competitor prices and provide you with the cheapest, most trustworthy deals. If the current cheapest price for Twisted Arrow is too high, create a price alert and we will alert you through email, SMS, or discord the moment the Twisted Arrow price matches your budget.

Can I play Twisted Arrow immediately after the purchase?

What store should I choose for the best Twisted Arrow Deal?