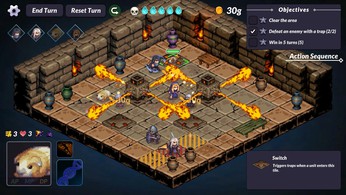 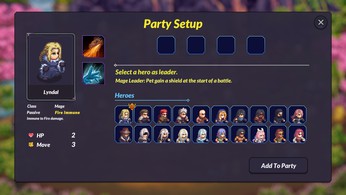 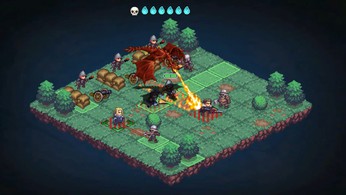 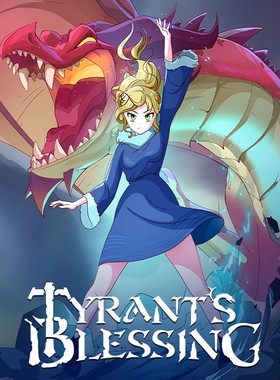 The Tyrant landed in Tyberia bearing promises of a paradise, without war, without suffering… and without death. All Tyberians had to do in order to enter his paradise was to simply die at the hands of his Dead Army. The war was over before it even began, with thousands perishing in the Tyrant's wake, only to be brought into his fold as undying thralls, bound by magic. The few living warriors left are scattered across the remnants of their homeland, tirelessly looking for a way to turn the tables on the tyrannical Tyrant. Lead a great Uprising, defeat the Dead Army, and drive the monstrous overlord back into the depths of the sea from whence he came.

Tyrant's Blessing is a tactical turn-based game where your ability to plan, adapt, and strategize is more important than min-maxing your units or finding the sharpest sword in the hoard. Select battles every day, make challenging choices, and cleverly use the strengths of these rag-tag insurgents to defeat the undead hordes and maybe - just maybe - bring real life back to Tyberia.

Before you bring the battle to the Tyrant's doorstep, you'll have to make sure you live long enough to reclaim the Island.

The Tyrant can't be defeated without destroying an army's worth of the Undying. However, winning is more than simply whacking the enemy as hard as you can.

Each of your heroes has their own personality, properties, and abilities. Who will you choose to put in harm's way?

Where can I buy a Tyrant's Blessing Key?

With GameGator, you are able to compare 6 deals across verified and trusted stores to find the cheapest Tyrant's Blessing Key for a fair price. All stores currently listed have to undergo very specific testing to ensure that customer support, game deliveries, and the game keys themselves are of the highest quality. To sweeten the deal, we offer you specific discount codes, which you will not be able to find anywhere else. This allows us to beat all competitor prices and provide you with the cheapest, most trustworthy deals. If the current cheapest price of $11.02 for Tyrant's Blessing is too high, create a price alert and we will alert you through email, SMS, or discord the moment the Tyrant's Blessing price matches your budget.

Can I play Tyrant's Blessing immediately after the purchase?

What store should I choose for the best Tyrant's Blessing Deal?