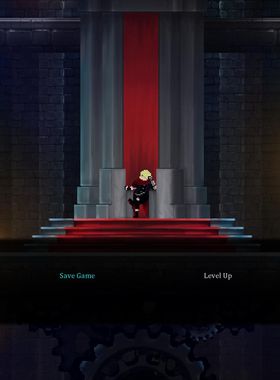 Usurper is a Metroidvania Action-RPG. With Eldritch horrors having been unleashed by the outer-worldly Citadel, your job is to rid London of its terrors. Use the new "Guard" system that rewards skillful play and accuracy, to uncover the massive structure and defeat the nightmares lurking within.

Usurpers battle system is built around "Guard"; a system that allows the player to charge through attacks and take risks, rewarding accurate timing and risk assesment. Instead of immediately losing health when the player is hit, they will loose "Guard points" (which function like a regeneration shield). When these run out, the player will take damage normally. However, if the player accurately dodges through incoming attacks, they will turn a large portion of that attack damage into "Guard points", which allows you to turn the tide of the fight, and gain the upper hand. This is a system that will allow anyone to get into the game, yet still provide a high skill ceiling for those players looking for a challenge.

Players can also take advantage of a reflective shield; capable of turning most enemy projectiles into "friendly" ones, so you can strike back with the enemys own weapons. While this will not regenerate Guard, it will still negate attacks at a lesser Guard cost.

If youre looking for even more content, then there are innumerable secrets, additional areas and optional bosses to discover. Or perhaps youd rather set your own difficulty by activating special conditions such as; no-guard mode, 1 HP mode, perma-death, or a built-in speedrunning mode.

However you choose to play, The Citadel is a massive and versatile interconnected world. There are countless shortcuts to uncover, and a variety of diverse areas; from human towns to alien landscapes, grand libraries to ethereal gardens, and from an Eldritch engine to a crashed spaceship.

Usurper takes place in an alternative timeline of 1898 in London. The outer worldly Citadel has landed in the city causing massive panic and releasing the maddening Fog. Recently re-crowned Empress Eleanor has assembled the royal forces and her four most loyal Knights to enter the Citadel - in the hopes of learning more, and hopefully finding a way to rid London of this terror. Meanwhile, Waltham, the leader of the Veimar, uses his own forces to ascend the Citadel and challenge the Navigator for his own...purposes...

Usurper is a sequel to Shrouded in Sanity, however, knowledge of the first game is not necessary.

Where can I buy a Usurper Key?

With GameGator, you are able to compare deals across verified and trusted stores to find the cheapest Usurper Key for a fair price. All stores currently listed have to undergo very specific testing to ensure that customer support, game deliveries, and the game keys themselves are of the highest quality. To sweeten the deal, we offer you specific discount codes, which you will not be able to find anywhere else. This allows us to beat all competitor prices and provide you with the cheapest, most trustworthy deals. If the current cheapest price for Usurper is too high, create a price alert and we will alert you through email, SMS, or discord the moment the Usurper price matches your budget.

Can I play Usurper immediately after the purchase?

What store should I choose for the best Usurper Deal?