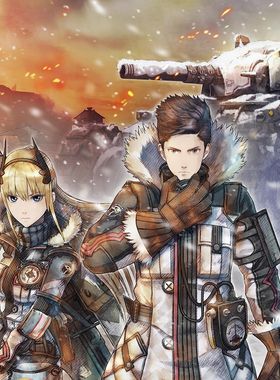 Another character is also introduced on the left side of the preview scan. She is Angelica Farnaby, voiced in Japanese by Ayane Sakura. She is a civilian girl who has an amnesia. However, due to her bright, selfless, and kind personality, she quickly becomes popular among army soldiers. There is also a scene where she stands face-to-face against the enemy Valkyria, Climaria Levin.

Famitsu also uploaded a screenshot featuring a new red-haired woman with glasses who doesn't appear in the preview scan. She is Minerva Victor, who will be voiced in Japanese by Saori Hayami. She is the Squad leader of Squad F, putting her in the same rank as Claude. Although she's honoring the codes of chivalry, she is also sociable to her squad members.

Valkyria Chronicles 4 is also confirmed to have the same growth system as the first game where experience is allocated to classes rather than individuals, so all characters with the same class will level up together. Reaching a certain level will unlock a higher grade of the class.

Where can I buy a Valkyria Chronicles 4 Key?

With GameGator, you are able to compare 35 deals across verified and trusted stores to find the cheapest Valkyria Chronicles 4 Key for a fair price. All stores currently listed have to undergo very specific testing to ensure that customer support, game deliveries, and the game keys themselves are of the highest quality. To sweeten the deal, we offer you specific discount codes, which you will not be able to find anywhere else. This allows us to beat all competitor prices and provide you with the cheapest, most trustworthy deals. If the current cheapest price of $6.22 for Valkyria Chronicles 4 is too high, create a price alert and we will alert you through email, SMS, or discord the moment the Valkyria Chronicles 4 price matches your budget.

Can I play Valkyria Chronicles 4 immediately after the purchase?

What store should I choose for the best Valkyria Chronicles 4 Deal?