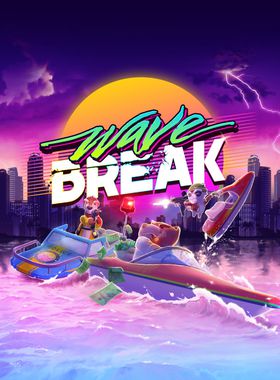 Challenge yourself with familiar objectives, collectibles and high score missions. It's skateBOAT or die as the rivalry between Wave Break's usual suspects plays out in an episodic storyline involving guns, kickflips, and blood money.

Compete to be the best flippin' champ in online ranked matchmaking, or group up with online friends in custom game modes. Up to 4 local player splitscreen supported. Compete for high scores in Trick Attack, battle it out in Deathmatch, or practice and refine your skills in Free Play mode.

Create the park of your dreams using our advanced in-game Park Creator! Create and edit ONLINE with friends, or do it solo for super-focus. Unlock hundreds of custom clothing for maximum stylin', as well as tons of decals and decorations for your boats. Upgrade stats and unlock gear as you play and earn money.

Where can I buy a Wave Break Key?

With GameGator, you are able to compare 4 deals across 4 verified and trusted stores to find the cheapest Wave Break Key for a fair price. All stores currently listed have to undergo very specific testing to ensure that customer support, game deliveries, and the game keys themselves are of the highest quality. To sweeten the deal, we offer you 2 specific discount codes, which you will not be able to find anywhere else. This allows us to beat all competitor prices and provide you with the cheapest, most trustworthy deals. If the current cheapest price of $10.81 for Wave Break is too high, create a price alert and we will alert you through email, SMS, or discord the moment the Wave Break price matches your budget.

Can I play Wave Break immediately after the purchase?

What store should I choose for the best Wave Break Deal?