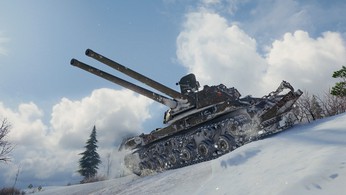 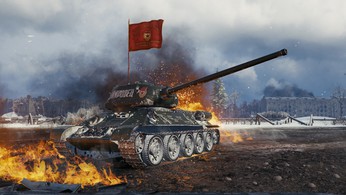 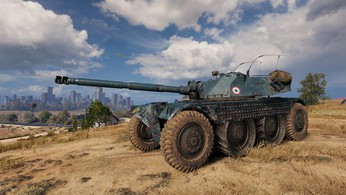 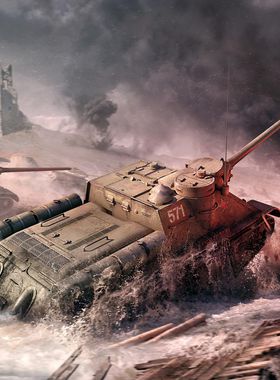 About World of Tanks

World of Tanks is a massively multiplayer online game that revolves around armoured warfare in the mid-20th century. Embark on epic tank battles chain after chain with players from around the world as you fight for global tank domination. An advanced system of vehicle upgrades and enhancements allows you to try out all the vehicles and weapons in the game. Take control of a tank and take part in tactical battles with 14 other players. Receive credits and experience points for every match and buy new tanks and upgrades.

The Second World War is used as the scenario of the game, but not in the usual way. Tank models reach anywhere between the years of 1930 to 1950, wich some of them stemming from the Korean War. World of Tanks, furthermore, does not divide by nation: German, American, and Soviet tanks fight side by side. Every tank has its advantages and disadvantages. While the artillery tanks can eliminate enemies from long range, they can only move at a snail's pace, are held back by extremely long reloading times and cannot rotate their turret: the entire tank has to rotate to target opponents. Hunting tanks can tilt their cannons, but they can too only fire forwards. Their big cannons, however, are likely to take out enemies with just one shot, especially when hitting the thinly armoured rear of tanks. The usual main battle tanks, on the other hand, have rotating turrets and can thus react flexibly to attacks and take a comparatively quick time to reload. In return, they cause less damage to other vehicles.

Every battle is different and requires a unique tactical approach. This is partly due to each of the 16 battlefields offering several ways to attack - you will never know where the enemy will invade from this time. Teamwork plays an important role, as going solo will result in death in no time. Search for cover, peer around the corners of rocks and houses, give off a burst of fire and hide again immediately. If a tank spots an enemy, it automatically reports its position to its comrades in radio distance. It can, therefore, be worthwhile to dash towards the enemy inside a nimble tank to uncover enemies. The rest of the team can then fire at the sighted rivals from distance.

Where can I buy a World of Tanks Key?

With GameGator, you are able to compare deals across verified and trusted stores to find the cheapest World of Tanks Key for a fair price. All stores currently listed have to undergo very specific testing to ensure that customer support, game deliveries, and the game keys themselves are of the highest quality. To sweeten the deal, we offer you specific discount codes, which you will not be able to find anywhere else. This allows us to beat all competitor prices and provide you with the cheapest, most trustworthy deals. If the current cheapest price for World of Tanks is too high, create a price alert and we will alert you through email, SMS, or discord the moment the World of Tanks price matches your budget.

Can I play World of Tanks immediately after the purchase?

What store should I choose for the best World of Tanks Deal?