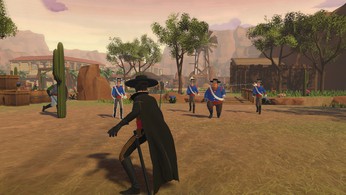 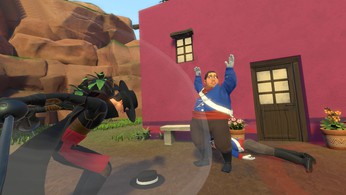 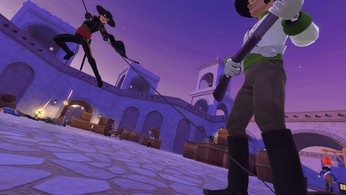 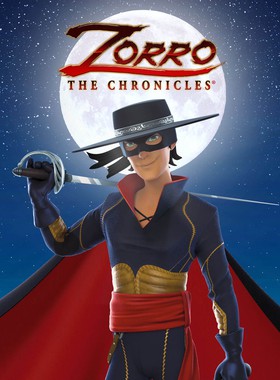 About Zorro The Chronicles

Zorro The Chronicles is an exciting and humorous action game that includes combat and exploration scenarios inspired by the TV series.

The epic adventure immerses you in the world of the successful animated series Zorro The Chronicles. Protect vulnerable and innocent people from the evil general and his army. Restore justice in 19th century Spanish California.

You can play as Zorro or his sister, Ines. Level up your heroes' skills by unlocking new moves.

Throw your opponents off balance with your sword skills, disarm them with a whip lash or sword strike, and pull off spectacular moves! Use your acrobatic prowess and reflexes to dodge their attacks. Then leave your mark on them by drawing a Z with the tip of your sword!

Explore 18 levels and adapt your approach according to the situation and enemies. Use cunning to surprise your opponents, sneak around them and explore the surroundings, or take them on in action-filled sword fights.

Encounter a wide variety of prominent characters from the animated series Zorro The Chronicles. Some of them will get in your way and be formidable enemies, while others will help you in your fight for justice.

Where can I buy a Zorro The Chronicles Key?

With GameGator, you are able to compare 17 deals across verified and trusted stores to find the cheapest Zorro The Chronicles Key for a fair price. All stores currently listed have to undergo very specific testing to ensure that customer support, game deliveries, and the game keys themselves are of the highest quality. To sweeten the deal, we offer you specific discount codes, which you will not be able to find anywhere else. This allows us to beat all competitor prices and provide you with the cheapest, most trustworthy deals. If the current cheapest price of $6.58 for Zorro The Chronicles is too high, create a price alert and we will alert you through email, SMS, or discord the moment the Zorro The Chronicles price matches your budget.

Can I play Zorro The Chronicles immediately after the purchase?

What store should I choose for the best Zorro The Chronicles Deal?