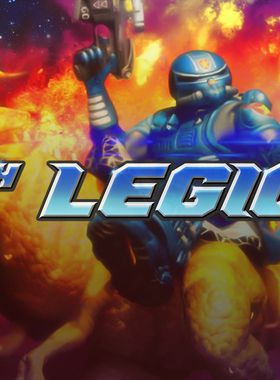 There's no Salvation from this army! Can you survive this furiously fast, kill-for-money, real-time blood-fest? There's nowhere to hide as you smash your opponent in'to-the-limit' conflict. And, while you've got a few nanoseconds to spare, you've got to build to survive, mechs, tanks, troops, mounted slavens - a host of murderous military units who will hone their killing skills with experience.

Just what devastating effect does a 7th legion priest have in battle? what happens when you summon the dark legion? The landscape is isometric and you've got to be ice-cool to survive in the blazing heat of combat. And there's more! Random power ups and a massive selection of battle cards that can turn the tides of war in a flash. But be careful: you don't know what cards your opponent is holding and even when you've got his last trooper cornered he might play the battle card that wipes away your entire force!

Where can I buy a 7th Legion Key?

With GameGator, you are able to compare 10 deals across verified and trusted stores to find the cheapest 7th Legion Key for a fair price. All stores currently listed have to undergo very specific testing to ensure that customer support, game deliveries, and the game keys themselves are of the highest quality. To sweeten the deal, we offer you specific discount codes, which you will not be able to find anywhere else. This allows us to beat all competitor prices and provide you with the cheapest, most trustworthy deals. If the current cheapest price of $0.91 for 7th Legion is too high, create a price alert and we will alert you through email, SMS, or discord the moment the 7th Legion price matches your budget.

Can I play 7th Legion immediately after the purchase?

What store should I choose for the best 7th Legion Deal?