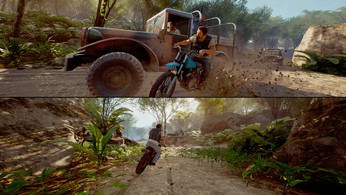 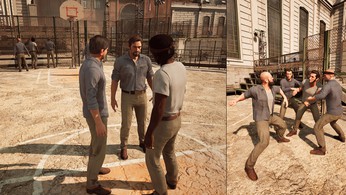 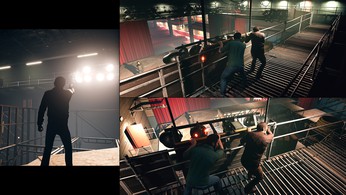 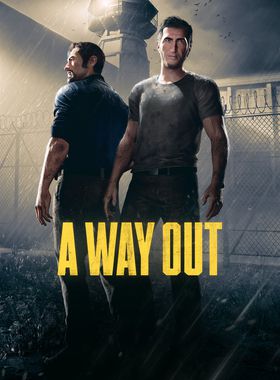 About A Way Out

Follow the story of Leo and Vincent, two strangers who learn to work together to break out of prison. They go on a journey with many memorable moments of action: car chases, sneaky passages, hand-to-hand fights, and shoot-outs. On their way to a common goal, you will learn more about their lives, their personalities, and the people they love. The game must be played by two users - either in split-screen, or online coop mode. There is no single-player story, nor is it possible to play the game with an AI ally.

In times, when co-op games have become scarce, it's refreshing to see a young development studio come up with a game like A Way Out. Meet Vincent Moretti in his mid-forties, who is just entering prison. His crime: the murder of his brother, his sentence: 14 years behind bars. His future partner, Leo Caruso, has been in prison for some time. The 36-year old is serving an eight-year prison sentence for aggravated robbery. While Vincent still has to get used to his new surroundings, Leo, therefore, has nothing else on his mind but to stir up the pack - it doesn't take long until both of them are involved in a serious brawl, which takes them straight to the infirmary.

It is here, where the two start their first conversation and share their escape plans. Through the close cooperation and the resulting relationship of trust, a friendship quickly ensues. The story is told similar to an interactive film and is always supported by cinema-like camera movements. Immerse yourself in the thoughts of the characters and act as if you were fleeing from the police yourself. Agree on various decision-making options with your co-op partner: Do you tie up the old couple who live at the farm to get new clothes, or do you scare up the horses to lure the owners out of the house for a short time?

Discover lovingly designed and varied locations with all kinds of things to discover. The co-op component is used to great effect. On the farm, Leo and Vincent have to play music to earn a trophy While one of them is jamming away on the piano, the other plays the banjo simultaneously. Both players have to press different buttons at the right time, and you will only succeed if you both did a good job. Mini-games can be found all over the world and are designed to keep you busy for a while - like playing Connect Four against your partner.

Where can I buy a A Way Out Key?

With GameGator, you are able to compare 19 deals across verified and trusted stores to find the cheapest A Way Out Key for a fair price. All stores currently listed have to undergo very specific testing to ensure that customer support, game deliveries, and the game keys themselves are of the highest quality. To sweeten the deal, we offer you specific discount codes, which you will not be able to find anywhere else. This allows us to beat all competitor prices and provide you with the cheapest, most trustworthy deals. If the current cheapest price of $7.93 for A Way Out is too high, create a price alert and we will alert you through email, SMS, or discord the moment the A Way Out price matches your budget.

Can I play A Way Out immediately after the purchase?

What store should I choose for the best A Way Out Deal?