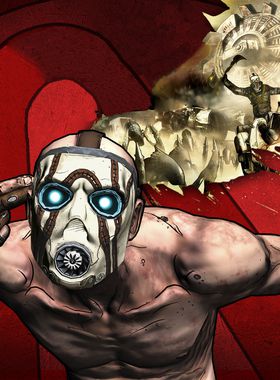 Pandora is a planet that was once seen as a promise for any kind of soldier of fortune. Untold riches were promised to all who embraced this promising world. In the meantime, however, the gold rush has subsided, leaving behind only failed livelihoods, bandits, and extremely dangerous fauna. And it is into this environment that the player now finds himself. As a newcomer to this inhospitable world, the player must now assert himself against vast numbers of human and non-human enemies to find the legendary "Chamber", which is said to be filled with immeasurable treasures. But unfortunately, you are not the only one who wants to claim these riches for himself. "Borderlands" initially plays like a classic first-person shooter. From the first-person-perspective, you steer your character through a world that could have originated in a Mad Max movie; mainly, you move through post-apocalyptic seeming desert landscapes, which are now and then interrupted by human dwellings, be it a bandit camp or even a small town. As one of four possible characters, which differ from each other by their abilities, you are now on your way here to make your luck. So you can set off as a soldier with excellent all-round skills or as a sniper, who has advantages in long-range combat. You can also choose between an assassin who can make herself invisible for a short time and a berserker who excels in close combat. These characters play themselves differently and can also go into battle together because "Borderlands" can be played alone or cooperatively with up to three other players, whereby each player takes one of the described roles. The game itself then runs in such a way that you receive missions from contacts in the game. These usually consist of the order to get certain items or kill specific bandits or monsters. "Borderlands" is a great game. It combines elements from action role-playing games like "Diablo 2" or "Titan Quest" with content known from first-person shooters like "Left 4 Dead" or "Perfect Dark Zero". This mixture is new and also knows how to fascinate, especially the passion for collecting and the desire to make one's own character better and better keeps the player on the line. The possibility to play the game with up to three friends at the same time also adds to the fun of the game and almost makes you forget that the game, in principle, hardly has a real story.

Where can I buy a Borderlands Key?

With GameGator, you are able to compare 12 deals across verified and trusted stores to find the cheapest Borderlands Key for a fair price. All stores currently listed have to undergo very specific testing to ensure that customer support, game deliveries, and the game keys themselves are of the highest quality. To sweeten the deal, we offer you specific discount codes, which you will not be able to find anywhere else. This allows us to beat all competitor prices and provide you with the cheapest, most trustworthy deals. If the current cheapest price of $9.03 for Borderlands is too high, create a price alert and we will alert you through email, SMS, or discord the moment the Borderlands price matches your budget.

Can I play Borderlands immediately after the purchase?

What store should I choose for the best Borderlands Deal?